Who is Benefiting from Global Growth? 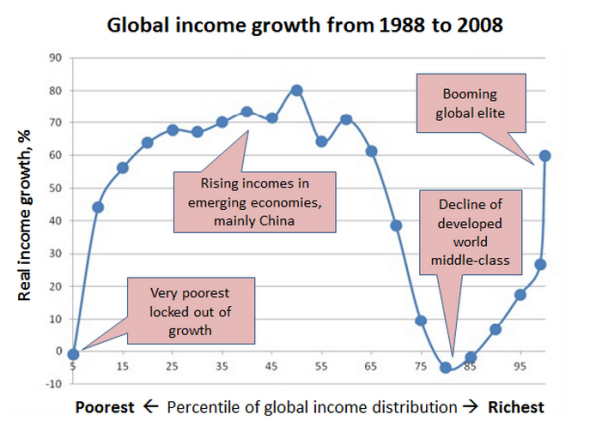 Interesting chart from economists Branko Milanovic and James Plunkett shows who gained from economic growth over the 1988 to 2008 period. You can see that except for the poorest of the poor, most of the world has gained a lot. This is because of the rise of a middle class in China, India, Thailand, Malaysia, and so on; the world economy has lifted a billion or so people out of poverty over the past 30 years. The very rich are also doing well, but then you already knew that. The interesting thing is the trough between about the 70th and 90th percentiles. Those people, moderately rich on the global scale, are the middle class of the United States, Europe and Japan. We are going nowhere. This is partly because we are getting stomped on by the rich, but mostly because we are now in direct competition with the middle class of China, India, and so on. Global companies can get the same quality of work by paying somebody in Guangzhou or Benares wages that seem generous by their standards but paltry by ours, so of course that is what they are doing. Those falling salaries and disappearing jobs radiate throughout our economy, holding down wages for a wide swath of people. The result is that they rise and we tread water. I am not sure what anybody can or should do about this.

But I would be happy to experiment with raising taxes on the rich and investing the money in American infrastructure -- trains, roads, schools, etc. -- to see if that will help the mass of Americans benefit more from global growth.
Posted by John at 12:33 PM