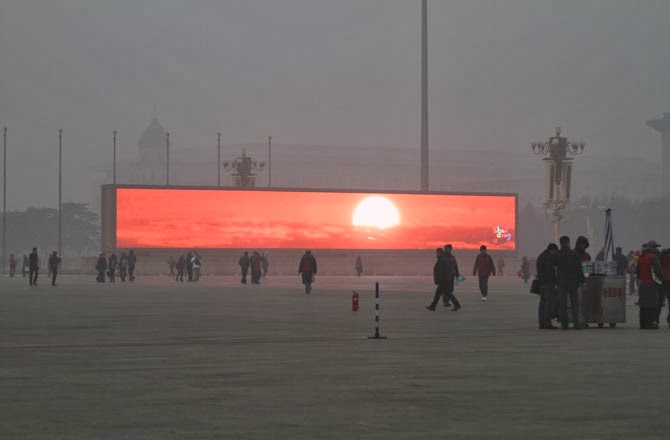 In today's apocalyptic news, Beijing authorities have responded to record air pollution by programming the large LED screens they use for public announcements to display sunsets. Above, Tiananmen Square.

This is really like something out of Blade Runner.

UPDATE: According to this guy, that original story was wrong. This isn't a broadcast of a sunset, it's an ad for tourism in Shandong Province. But he also says that the ad runs at about the same time every day. Running an tourist ad full of beaches and lovely sunsets strikes me as nearly as insidious as just broadcasting a sunset. That also seems Blade Runner-esque to me, to run prettied up ads for vacations that most people walking by can't afford at dusk every day when conditions in Beijing are most miserable. Less weird, but just as totalitarian.
Posted by John at 2:25 PM