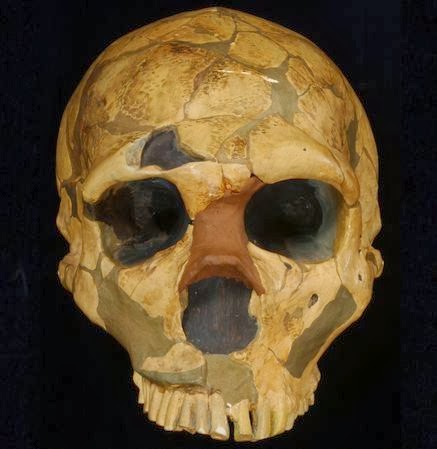 In another blow to Paleodiet nonsense, a team of forensic anthropologists have recently published a detailed study of the dental calculus (plaque) of European Neanderthals. John Hawks summarizes:
It is the bitter alkaloids that have gotten most of the attention, focusing on the possible use by Neanderthals of medicinal plants. I don't see why that would be so surprising, since chimpanzees seem to chew bitter branches of certain shrubs to treat intestinal parasites, but it is interesting. Another theory would be that the Neanderthals ate the stomach contents of animals they killed, as many Arctic peoples still do.

What the dental plaque did not show was much evidence of meat protein. So far as this study shows, Neanderthals ate more cooked plants than meat. I suspect that there are some issues with the survival of animal proteins over tens of thousands of years, but anyway that is what the study shows. So if you really want to eat like a paleolithic person, you should cut back on meat and eat more roasted roots.
Posted by John at 7:56 AM