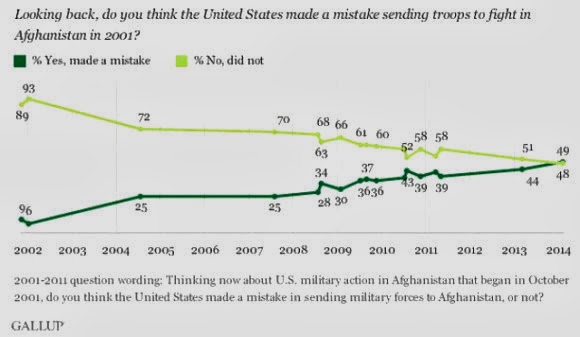 Back in 2001, just about everybody in America supported intervening in Afghanistan. My position at the time was that while I didn't expect it to go very well, I understood that it was inevitable -- the Taliban were sheltering people who had made war on America, and we were not going to stand for that. But when you let a war drag on for more than a decade with no resolution, even a war that started with clear and defensible motives, eventually even Americans will turn against it.

What we should have done, I think, is make some kind of big push in 2004-2005 to get the Taliban on the run and then "declare victory and get out." But we didn't, and now we are going to pull out of a nation on the edge of civil war, collapse, and a Taliban return to power.
Posted by John at 11:04 AM