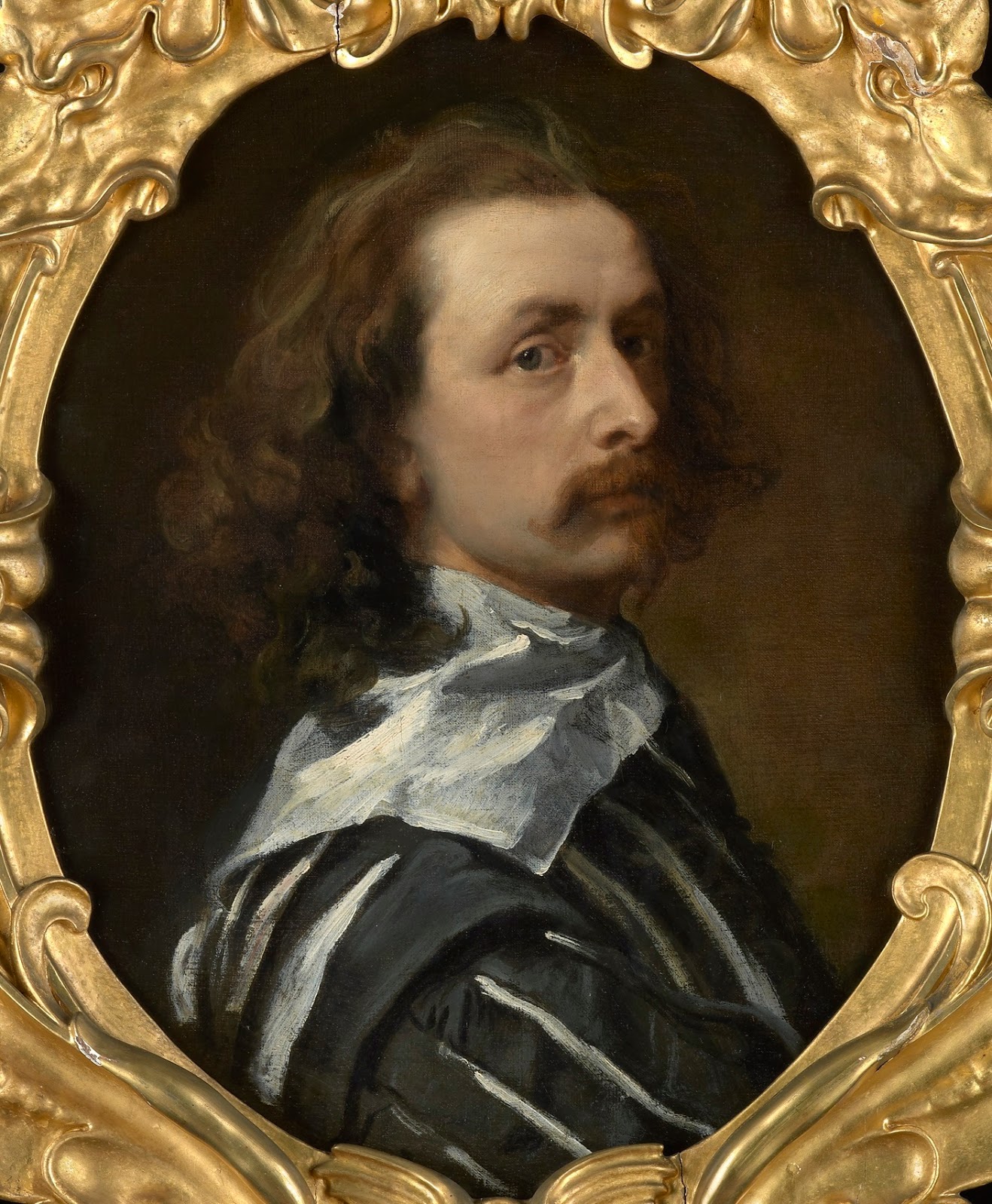 Anthony Van Dyck (1599-1641) was a Flemish artist who rose to fame and fortune as the court painter for that unfortunate cavalier, Charles I of England. This wonderful self-portrait has been in England for centuries but was just sold to an overseas buyer. English law gives an English museum the chance to match the bid and keep he work in the country, and as I write National Portrait Gallery is trying to raise £12.5 million to acquire the work. 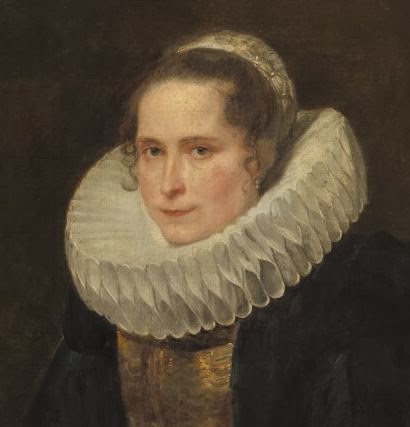 Van Dyck's earliest surviving works date to 1615, when he was only 16. By then he was already working in the studio of Rubens, perhaps adding highlights to sumptuous female flesh -- or did the master reserve that privilege for himself? Any any rate Van Dyck was quite a prodigy, and he registered as a master in the Antwerp painters' guild at the age of nineteen. That was the year he painted this Portrait of a Flemish Lady (detail). 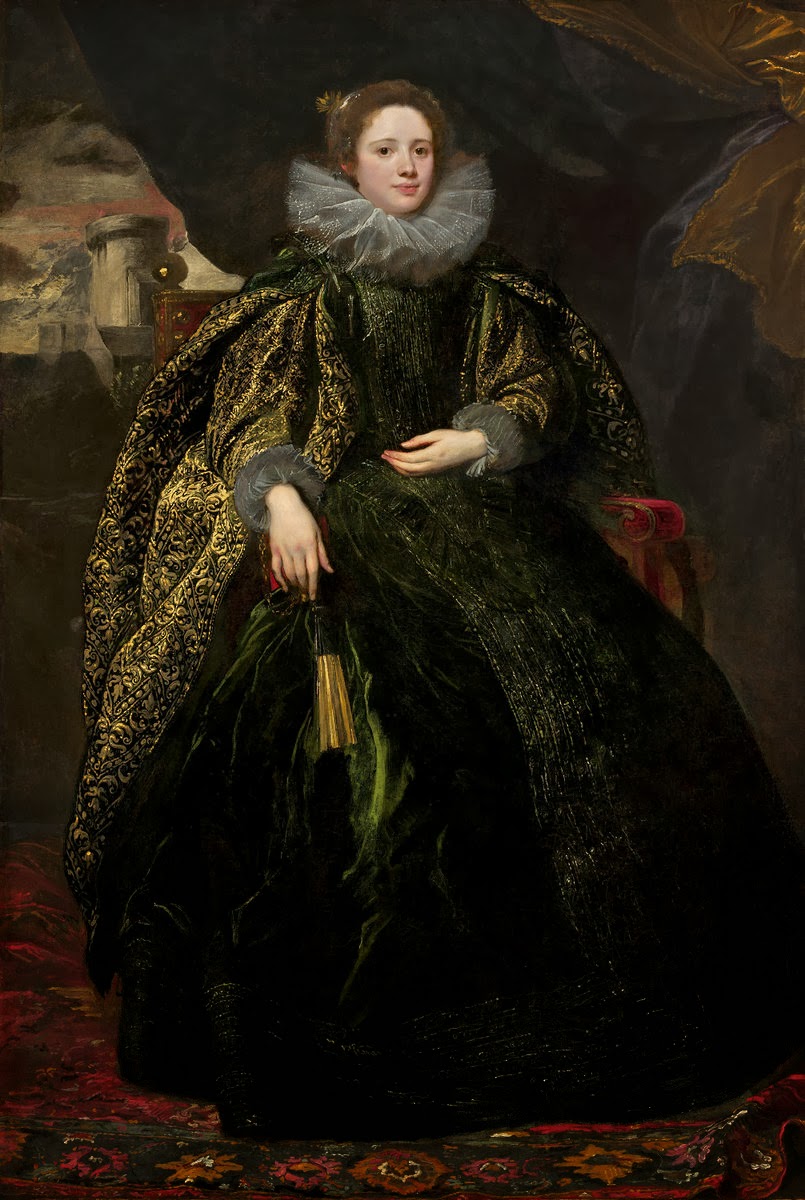 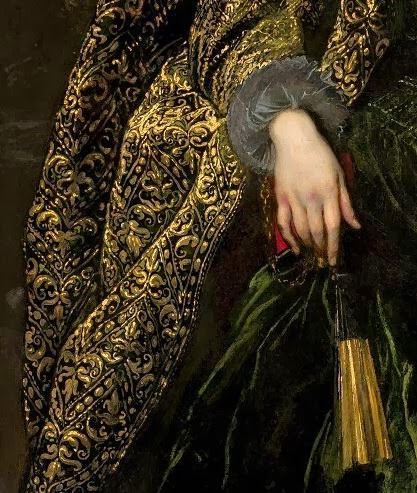 The Marchesa Balbi, 1623. In 1620 Van Dyck was summoned to England and paid £100 by James I for a painting that does not survive. It was in England, in the home of the Earl of Arundel, that he first saw paintings by Titian. Awed, Van Dyck left Rubens' studio in 1621 and went to Italy to learn this new way of seeing. One of his first works there was this striking portrait of a noblewoman from a family that did a lot of business in Antwerp. The most notable thing about it may be the flattering distortion of the subject's anatomy, to a degree that puts even Vogue in the shade. The National Gallery:


In this work Van Dyck took advantage of the austerity of Genoese attire. No matter how sumptuous the fabrics, adults were permitted to wear only black and white. In a bravura display of lighting, Van Dyck defined the marchesa's stark outfit with a cascade of gold embroidery that glistens in the shadows. Beneath these striking tones and textures, Van Dyck elegantly elongated her anatomy. Her skirt and lace ruff disguise legs and a neck half again as long as any conceivably normal proportions. 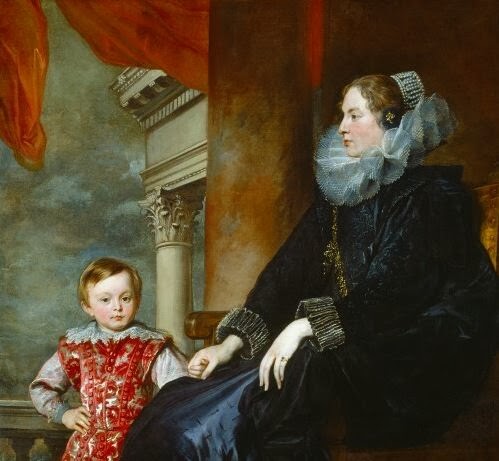 Detail from A Genoese Noblewoman and her Son, c. 1626. Quite the arrogant family, no? The Italian art dealer Bellori wrote a description of Van Dyck in this period that emphasized the artist's own aristocratic vanity:


his behavior was that of a nobleman rather than an ordinary person, and he shone in rich garments; since he was accustomed in the circle of Rubens to noblemen, and being naturally of elevated mind, and anxious to make himself distinguished, he therefore wore—as well as silks—a hat with feathers and brooches, gold chains across his chest, and was accompanied by servants. 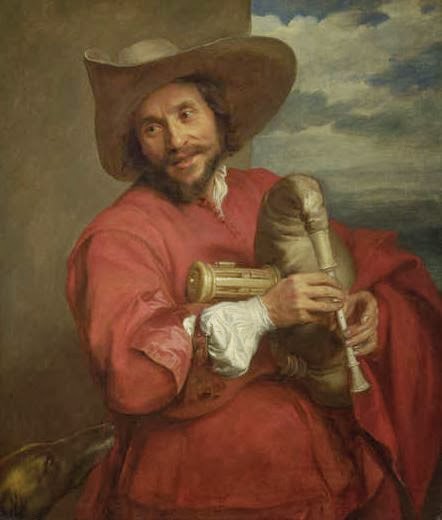 Portrait of François Langlois, a French art dealer Van Dyck met in Italy. Since Langlois acquired art for the British royal family, he might have been instrumental in getting Van Dyck summoned to London later on. Van Dyck returned to Antwerp in 1627, and this was probably painted there in 1630 or 1631. Langlois is dressed as a Savoyard shepherd, one of those Arcadian games that so delighted the nobles of the day. Here you can see the new use of color Van Dyck learned in Italy. 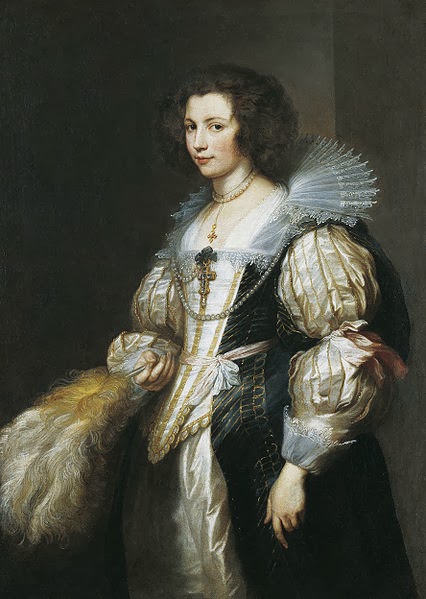 Another painting of the second Antwerp period, and one of my favorite Van Dyck works, the scheming Marie-Louise de Tassis (1630). Actually I have no idea if she was a schemer or not, but just look at her. 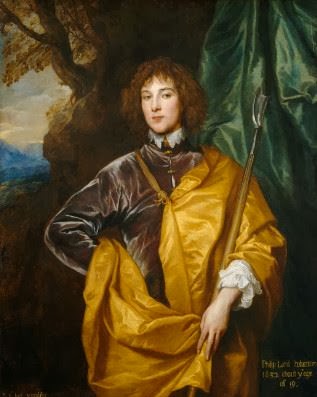 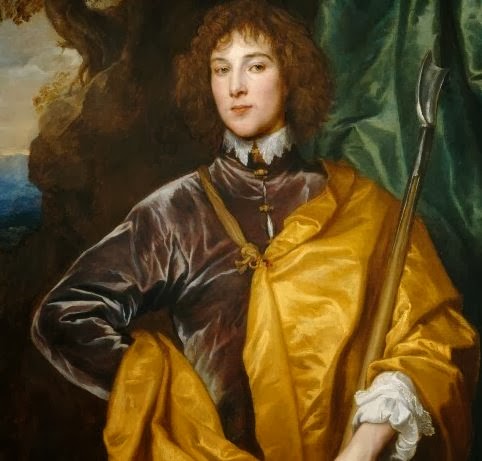 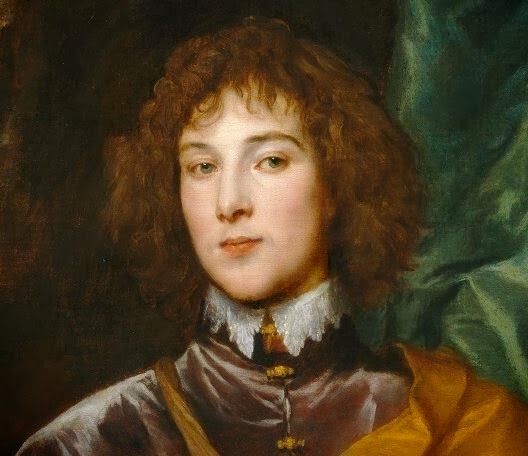 Philip, Lord Wharton, 1632. According to the National Gallery,this was


one of Van Dyck's first private commissions after he arrived in London in March 1632. Casually bracing a shepherd's crook in his arm, the nineteen-year-old aristocrat engages in a pastoral masquerade. The relationship of the handsome youth to the Arcadian landscape suggests a philosophical attitude that pervaded Charles I's court. A classical concept of ideal love had come to encompass, through Christian interpretation, the idea that physical beauty was a means of spiritually approaching God.

I see Titian's colors again here, not to mention another bit of pastoral theater. 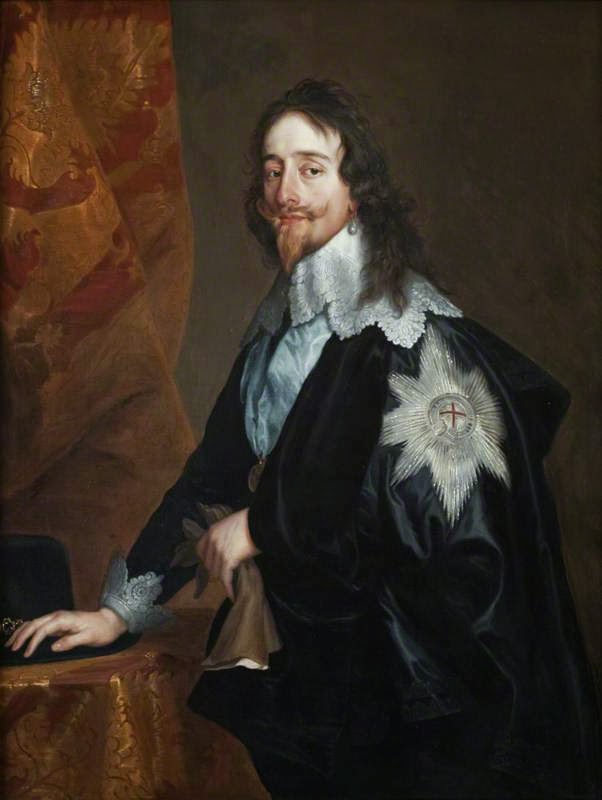 But it was portraits of the King and Queen that made Van Dyck's reputation and won him a knighthood. This is my favorite of these royal affairs, Charles I in 1638. He looks a little worried, as if he could see a dust cloud in the distance. 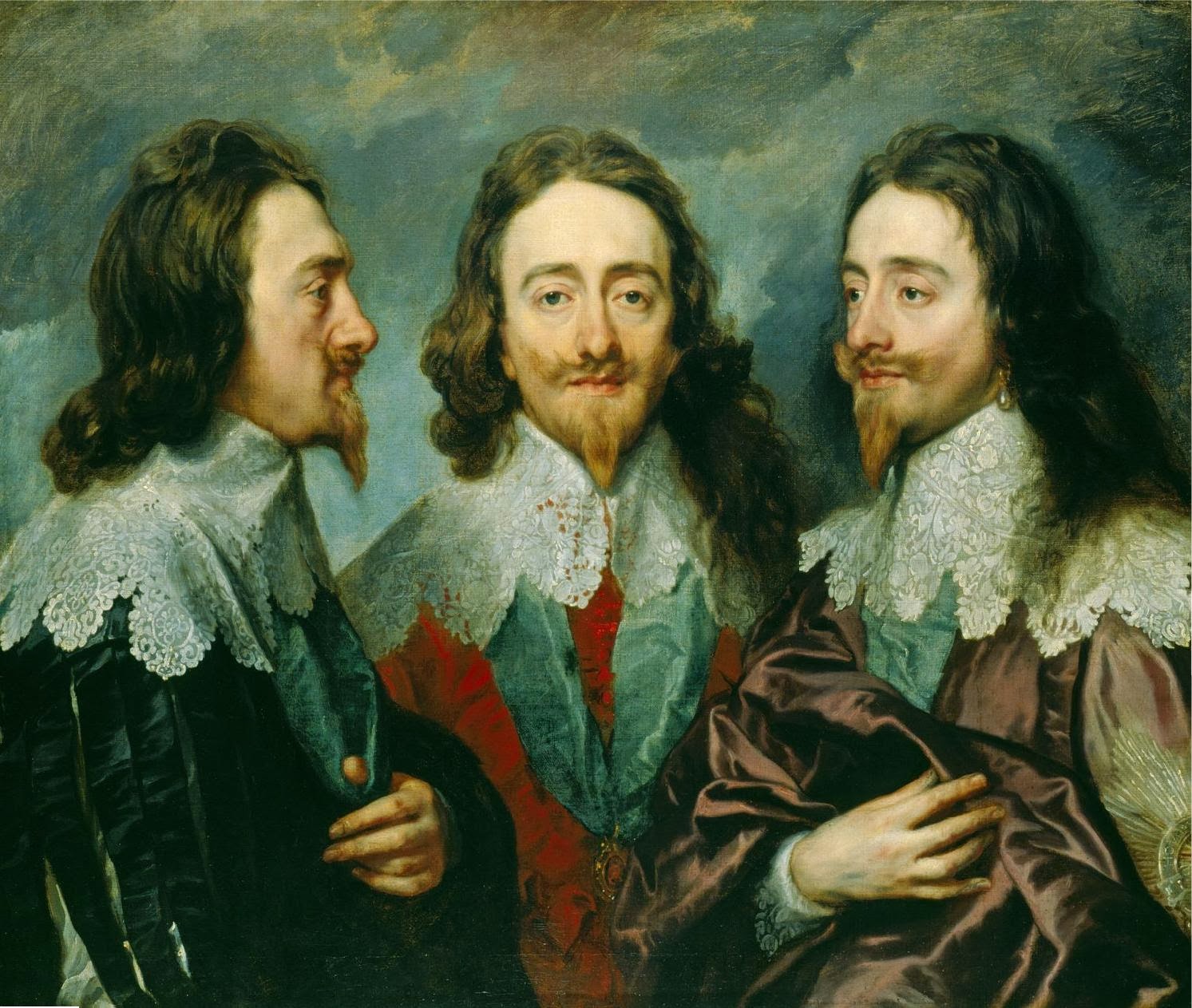 Triple portrait of 1635-1636 that wikipedia says was done so Bernini could model a bust on it. 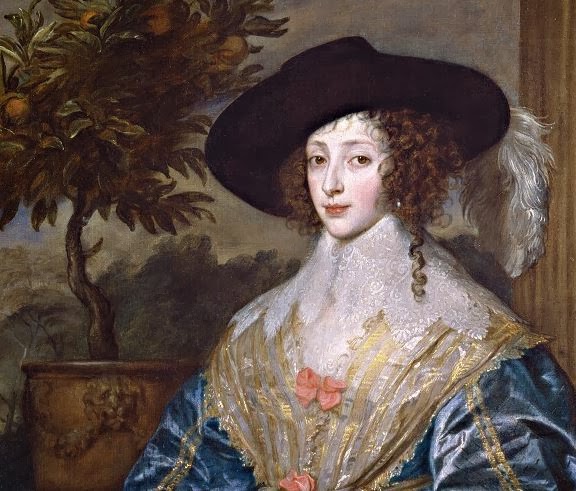 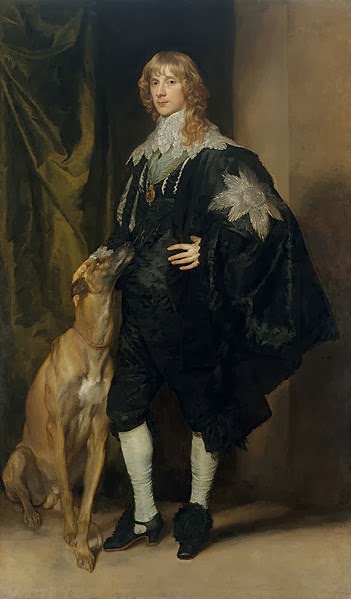 James Stuart the Duke of Richmond, a cousin of the king, privy councilor and important leader in the royal party. 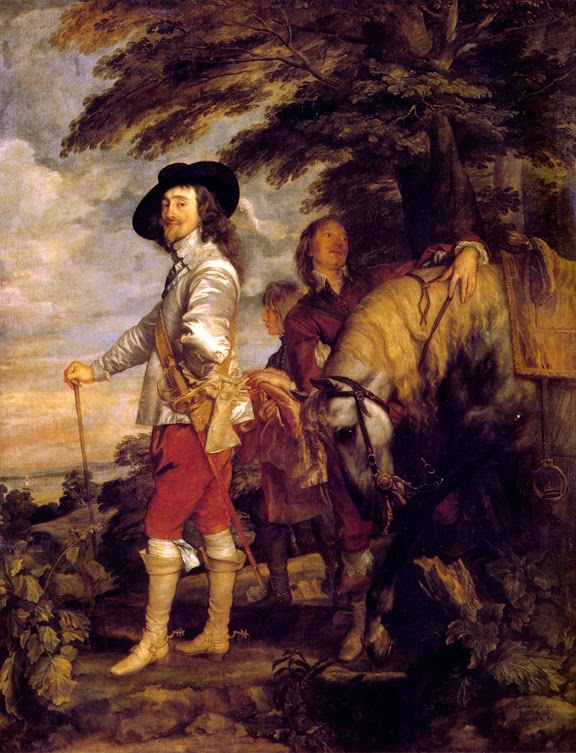 Charles I at the Hunt, 1635, which people like to say set the standard of  easy elegance for the age. 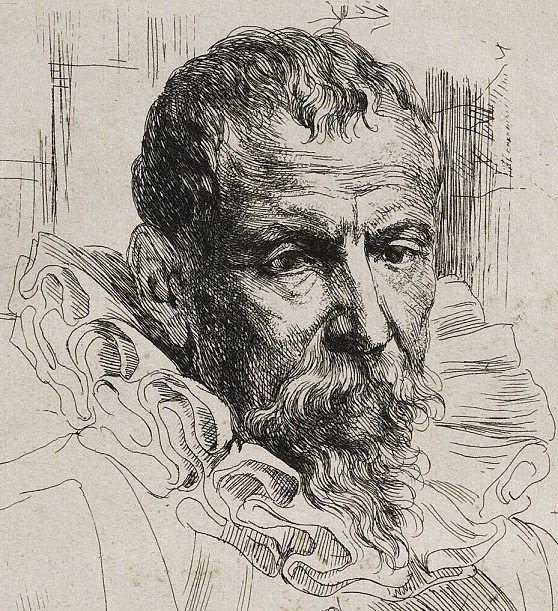 And one more, an etching of Van Dyck's friend Pieter Brueghel the Younger. Van Dyck fell on hard times when Civil War came to England, and then he was felled by illness, dying in 1641. He is buried in St. Pauls.
Posted by John at 7:38 AM