Commemorating World War I in Britain 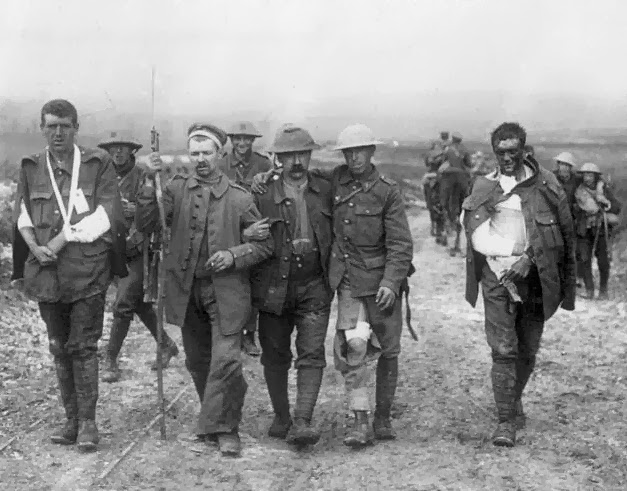 In Britain, the government has set out to stage a "non-political" 100th anniversary commemoration of World War I that is already embroiled in controversy. The problem is that historians still don't agree on what was really at stake in the war, and therefore whether the sacrifice of a million British men was worth it. One school holds that Germany had embarked on a brazen effort to dominate the continent, simultaneously making war on France and Russia, along with various smaller countries that got in the way. Britain had to join the conflict to keep the newly enlarged and aggressive Germany from dominating Europe and thus the world. As Tory education secretary Michael Gove put it in a recent column,


Our understanding of the war has been overlaid by misunderstandings, and misrepresentations which reflect an, at best, ambiguous attitude to this country and, at worst, an unhappy compulsion on the part of some to denigrate virtues such as patriotism, honour and courage. The First World War may have been a uniquely horrific war, but it was also plainly a just war. . . . The ruthless social Darwinism of the German elites, the pitiless approach they took to occupation, their aggressively expansionist war aims and their scorn for the international order all made resistance more than justified.

The response from the other side is, what outcome could possibly have been worse than the actual one? After four years of struggle that nearly bankrupted Europe and left 16 million dead, Germany was humiliated but not really defeated, leading directly to the rise of Hitler and thus to World War II, the worst event in human history. This is the view of many on the British left, who elide conservatives' retroactive support for World War I with their opposition to joining the European Union today. Tristam Hunt, who is the Labour Party's education point man, responded to Gove by complaining,


It’s all within a strain of anti-Europe, German-phobic thinking. . .. it’s a shame to let the politicians just frame this in terms of how we beat up the Germans.

But ant-war views are not only found on the left; perhaps the most famous historian taking this stand is Niall Ferguson, a Tory nationalist who thinks that by entering the war Britain broke its economy and insured its decline as a world power. Ferguson recently called the British entry into the war "the biggest error in modern history."

So good luck with that non-political commemoration.
Posted by John at 9:41 AM

To the anti-war argument, I would answer, first, that it seems to me WWI was the crucial beginning to the long process whereby war has been to an important extent delegitimized as a strategy of national aggrandizement. Without the two world wars, this would not have happened—or rather, my prediction is that it would have happened eventually because some other great war catastrophes would have occurred sooner or later.

Second, once the war started, Britain might have stayed out, but I think certainly the Hapsburg Empire, and probably the Russian as well, were doomed regardless of the outcome. And there is no way those two empires could have collapsed without, as far as I’m concerned, infinite turmoil and misery in some form, and no way Germany would not have been involved. Western Europe might have found peace with a truncated France and a mighty Germany, but I think an extended Eastern European bloodbath was probably inevitable.

As for the rightists, Ferguson is a pest. As far as I’m concerned, the sole justification for the existence of the British Empire was that it proved useful for the destruction of fascism in World War II.

There were plenty of people in Europe in 1910 who thought the continent was through with wars. I suppose they were foolish, but was there really no chance then that Europe would renounce war? If not, what can we say about our own time? Is the situation different now because of World War II and nuclear weapons? Or are we as deluded as the peaceniks of 1910?

I suppose the Russian empire was doomed, but why did that have to involve the rest of Europe in wars? The Chinese empire also collapsed, but that didn't involve wars with other states.

I would say that, so far, the situation has been different because of WWII and nuclear weapons, plus the feeling that the United States more or less insisted on stability in western Europe. This may change, but there's been a definite period when most of Europe has been pretty well debellicized (with the significant and perhaps predictable exception of Serbia and its environs).

It is possible the Russian collapse could have been managed, but it would have been a close-run thing. Historically, there were a dozen or more wars in Eastern Europe in 1918-22. And a Habsburg breakup would have been almost unmanageable--there's too much ethnic intermixing, and there's no plausible way the successor states as of 1914 weren't going to be based first and foremost on ethnicity, with the consequent tensions over minorities, long-lost beloved provinces, and so forth. And imagine how, say, the Kaiser's Germany, fresh from a victory over France, would have felt about a newly independent Poland breaking off from a collapsing Russia. And imagine how the new Poland would have felt about Germany. Remember that the scenario I was imagining involved Britain staying out of 1914, but the rest proceeding as is.

It is hard to imagine those empires dissolving peacefully. But if Germany had forced a quick settlement on France, they surely could have defeated the Russian government in a year or two. Whether whatever settlement they tried to impose would have lasted is another matter.But why would a lot of turmoil in eastern Europe and the Balkans necessarily have led to a catastrophe as bad as World War I, or to World War II?

At this point, no one can say. But I don't think you can take it for granted that it wouldn't have been as bad or worse. Imagine a decades of turmoil culminating in a fanatical, paranoid Russian revanchist regime facing a German constitutional monarchy dominant in central and western Europe in about 1950, and both on the verge of getting nuclear weapons.

I suppose part of my point is that, as I see the century's history, the British didn't have it in their power to make the kind of global peace or war decision that the seem to think they did. Britain deciding to stay out would not likely have meant peace for everyone else, and really bad stuff was going to happen no matter what Britain did.

Incidentally, I wonder what the French think of this British debate in which so many Britons seem to think that France would make a fine sacrifice for the sake of peace.

Certainly, for Britain to have stayed out of the war would not necessarily have led to some sort of good outcome. The question is whether Britain entering the war necessarily made things better in a way that balances a million dead men.

Most Frenchmen probably think, "Perfidious Albion redux." But there were Frenchmen in the 1920s who said openly that it would have been better to have lost the war in 1914 than to have endured four years of dying.