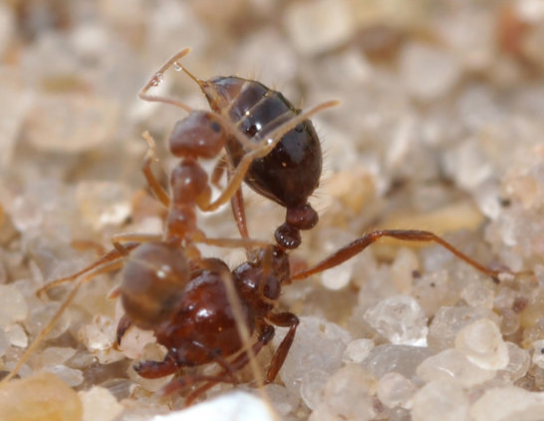 Until now, fire ants have been the unchallenged invasive menace of the American south, sweeping all insect and most other foes before them. But now they have a rival, the raspberry or tawny crazy ant. Crazy ants are a nightmarish species; rather than being formidable as individuals, they come in such huge numbers that they simply overwhelm opposition. John Mooallem:


They arrived at Mike’s house a few months after he first saw them at the cardiologist’s office. One day his air conditioning stopped working. A musty smell seeped from the vents in his living-room floor. So he powered up his Shop-Vac to clear them. By the time he was done, he’d sucked out five gallons of ants.

Soon he and his wife were waking up to find vast, frantic networks of ants zipping around the kitchen floor in all directions. When the picture on their 50-inch box television started flickering, Mike took off the back panel and found the guts throbbing with ants. He got rid of the television.

Outside, dead ants began pooling around the base of the house in heaps so high that they looked like discarded coffee grounds. (It’s common in Texas these days for a person who is shown one of these heaps of dead ants to take several seconds to realize that the solid surface he or she is scanning for ants actually is the ants.) Mike laid out poison, generating more heaps of dead ants. But new ants merely used those dead ants as a bridge over the poison and kept streaming inside.

“They literally come in waves of just millions,” Mike told me. (One Texas A&M entomologist confessed, “You figure these stories are laced with hyperbole, but when you get in there, it’s unreal.”)

Crazy ants reached Texas in 2002, and they are spreading rapidly. Nobody knows how to stop them. They come from South America, where their range overlaps with that of fire ants, so the two species have been battling for millennia. In this struggle the crazy ants have a secret weapon, which is that they are immune to the neurotoxin which is the fire ants' main weapon:


A crazy ant’s headlong charge into a mass of fire ants almost always results in it being smeared with venom. But once covered in the neurotoxin, these ants perform a systematic and ritualized behavior. First, an ant stands on its hind legs and curls up its abdomen, touching its mandibles to a small gland at the tip of its body called the acidopore. The ant then runs its front legs through its mandibles and grooms itself fastidiously.

It looks like the ant is covering itself with a secretion from its own body as a response to the fire ant's venom. To determine whether this behavior actually counteracts the venom’s effect, the researchers ran a controlled test. They used nail polish to seal the acidopore of one group of crazy ants, and simply sham-treated a second control group. After coming into contact with fire ant venom, the crazy ants with the sealed acidopores—which could not secrete any chemical defenses—had a survival rate of just 48 percent, whereas 98 percent of the control group survived. Clearly, something originating from the acidopore was increasing the survival of ants covered in venom.

By testing crazy ant secretions, the researchers found that the life-saving substance was actually formic acid from the crazy ants’ own venom. So far, it's unclear exactly how this chemical detoxifies fire ant venom. It’s possible that formic acid denatures the enzymes that enable neurotoxins to enter cells. . . .

So you can stop worrying about fire ants, because crazy ants are wiping them out. Worry about crazy ants instead.
Posted by John at 12:43 PM