Weird Skeletons from the End of Harappan Civilization 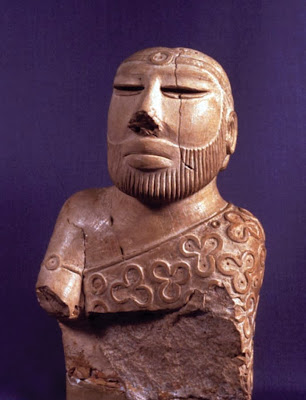 One of the most fascinating things about the Harappan civilization of the Indus Valley is its mysterious and sudden end. Some time around 1900 BCE, all of the great cities went into decline. Parts of the cities were abandoned, and within the still-occupied portions, the sewers were no longer cleaned out, the larger houses were divided into smaller structures by shoddily made walls, and the evidence for long-distance trade dries up. By 1700 BCE the cities had been almost completely abandoned. And it wasn’t just the big cities; careful surveys have shown that many villages also disappeared; in some regions the total area of all the known settlements fell by 80 percent. The civilization simply vanished, leaving no obvious heirs. This may have had something to do with climate change, and perhaps with the entry of Indo-European speakers ("Aryans") into India. Or not. Anyway, it's a great mystery. 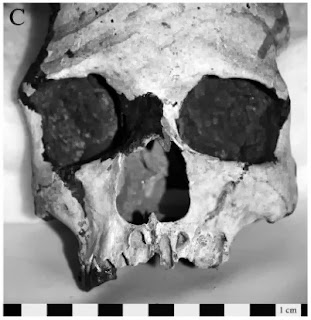 Enter Gwen Robbins Schug and her colleagues, who have studied 115 skeletons from the site of Harappa. These come from two cemeteries and an ossuary that produced 20 human skulls and a few other bones. The earlier cemetery dates to the "Urban Phase," 2500 to 2050 BCE, the later one to the "post Urban" period, 1900 to 1300 BCE. The ossuary has not been radiocarbon dated, but ceramics found with the burial suggest that it dates to around 2000 to 1900 BCE. This is a tiny sample for a community that had as many as 50,000 inhabitants, but it is what we have. 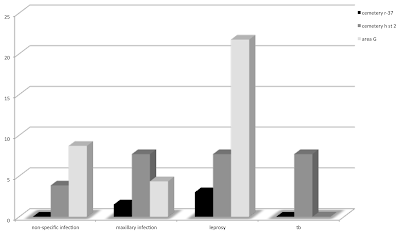 Insofar as I can understand their horribly written and abominably organized paper, what Schug et al. found was evidence of a population under a lot of stress from disease and low-level violence. They found evidence of leprosy in all the populations, which they had been curious about; since Harappan civilization had sizable cities and was tied by trade to the cities of Mesopotamia, they suspected that leprosy, the great scourge of poor, crowded people, would have migrated to the region. And it did. Rather than declining as the city emptied out, it seems to have been more prevalent among the pitiful bands huddled within the ruins than it had been before. So, it seems, was tuberculosis. This raises the possibility that one cause of the decline of these cities was disease; perhaps they became so sickly that they could not reproduce their populations. 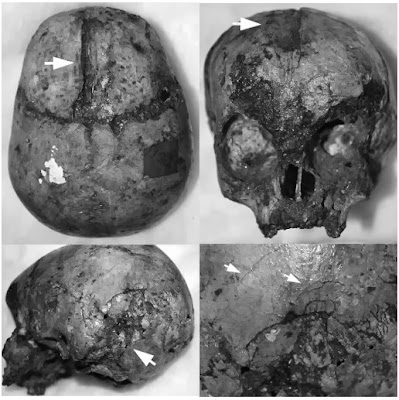 Harappan civilization presents us with little evidence of warfare -- no impressive fortifications, few weapons, no violent iconography, no burial evidence of a military caste. But analysis of these skeletons by Schug and colleagues (published separately, and available here) shows that peaceful is a relative term. The skeletons did not show many major wounds of the kind you get from swords or war hammers. Instead they show a frightening level of minor trauma, especially blows to the head, and especially among women and children. The rate of injury among women was much higher in the ossuary and in the post Urban cemetery. In the ossuary, half the skulls showed evidence of battering. These skulls were deposited outside the walls in a marshy area and probably represent some sort of outcast population: perhaps recent immigrants or an oppressed class of the poor and despised. Whoever they were, they were beaten a lot. The high rate of skull injuries in the post Urban cemetery, especially women and children, argues for severe social stresses of some kind. The picture of life in Harappa's ruins gets more miserable all the time: to the little apartments walled off within what were once grand houses, the clogged sewers, and the abandoned public spaces we can now add leprosy, tuberculosis, and the frequent, severe beating of servants, women, and children. The end of a civilization is never a pretty sight. These findings do not really explain Harappa's fall, but they add detail to our understanding of what its last citizens had to endure.
Posted by John at 7:49 AM