Searching for the Survivors of the Lost Colony 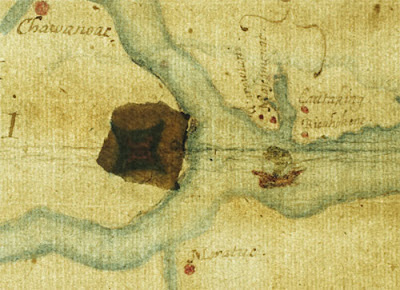 I wrote last year about the discovery that the symbol of an otherwise unknown fort was hidden under a parchment patch in John White's map of the Lost Colony in North Carolina, and I said that no doubt archaeologists would soon start investigating this location.

Now the first results of those investigations are being reported. The work began with ground-penetrating radar:


LeCompte and his colleagues found a previously undetected pattern that may indicate the presence of one or more structures, possibly made of wood, under about three feet (a meter) of soil.

"I don't know if it's one or a group [of structures]," he said, adding that they "could be joined or they could be close together." Perhaps the wood of the structures collapsed over time, leaving impressions in the surrounding soil, LeCompte speculated.

They then used a high-resolution magnetometer, but that was no more definitive.


The presence of the buried structure and the fence strongly indicate that there was some sort of colonial presence in the area. What complicates the story further is the presence of later colonial sites in the area through the 1700s.

I have to say that this is pretty underwhelming. Finding the 1587 colonists was always going to be a longshot. There weren't many of them, they didn't have much stuff that would be datable to their period, and wherever they went they didn't stay there long. The only thing I can think of that would really nail their presence down would be a square fort like the one shown on the map, but such a fort should be visible in the remote sensing data. An undatable post house or cellar with some generic colonial artifacts will not prove anything. Nor would just one or two sixteenth-century coins or trinkets, since such objects could easily have been traded to the Indians, or stolen by them. The most likely scenario is still that some of the colonists were killed and the rest moved in which friendly Indians.
Posted by John at 8:10 AM