I'm going to be teaching this spring at Hood College, the same "Celts to Vikings" class I taught three years ago. So I am updating my materials, including the slides I will be showing. The one branch of scholarship I deal with that has changed a lot in the past three years is genetics. I talk about this mainly because one of the big questions about the early Middle Ages is how much people moved around: was there an Anglo-Saxon migration to Britain, and if so, how many people migrated? How many Goths went to Italy, and where did they come from? And so on. In the course of this I stumbled across a wonderful set of maps of Y chromosome distribution in Europe. Above is a map of the R1 haplogroup, which probably originated in eastern Europe or western Asia around 18,000 years ago and is the most common clade in Europe. 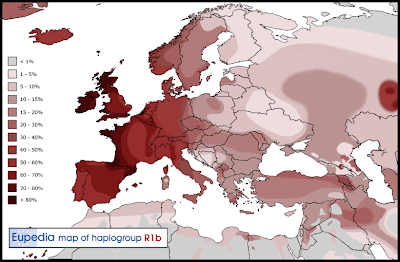 The R1 group is divided into two main lineages, east and west, as you can see in these maps. One school of thought is that R1a represents the Indo-Europeans; you can see that it originated on the Ukrainian steppe, but then spread westward.

Here, by contrast, is a map of the haplogroups that we are pretty sure came from the Middle East with the first waves of Neolithic farmers.

As our understanding of the genetic history gets better, we can get even more specific; this is lineage R-S21, which some people think originated among the German tribes of Frisia or the Netherlands around 2000 BCE. This map does't tell you when people migrated across the North Sea, but it tells you that they did.
Posted by John at 7:08 AM