In Kiev, another Lenin Statue Falls 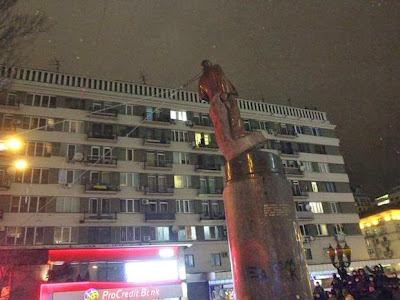 I have to say that my main reaction to the toppling of another statue of Lenin, in Kiev this week, was to be startled that there were any left to knock down. Didn't they get them all in 1991? Or during the "Orange Revolution" of 2004?

The basic issue in Ukraine is that after President Yanukovich spent a year negotiating an accord for closer relations with the European Union, including free trade, he decided to junk the agreement and instead make a deal with Vladimir Putin for cheap Russian natural gas.

The protesters have made their point loud and clear: they want to be part of "Europe", not of the "Former Soviet Union." They think Yanukovich gave in to Russian bullying or Russian bribes, and they want none of that. They want to be a western nation, not a Russian satellite.

And this is what protests are good for: proclaiming broad social goals. I am not sure, though, that they are a good way to make decisions about the details of international trade agreements. Does anybody really understand what was in that Ukraine-EU agreement, and what it would have meant for the Ukrainian economy? Which is in terrible shape, I might add, with falling real wages and high unemployment, not to mention that the government is on the edge of bankruptcy. Maybe free trade with the EU would help, but I don't see why, considering that much of the Eurozone is as bad off as Ukraine. A flood of European imports, coupled with a steep rise in the cost of natural gas, could send Ukraine into a decade of depression.

But you have to give this to the architects of the New Europe: they have decided to put political unification and an end to European wars above prosperity. As the European economy struggles, they have continued to insist on more unification, not less, no matter what it costs. If that dooms a whole generation to high unemployment, so be it; better joblessness than death in another great war. It is a bold stand.

The Ukrainian protesters have made taken an equally bold stand: we will give up Russian gas and shiver through the winter rather than bend our knees to Moscow again. We will fight with tightened belts and piles of blankets to be part of the western world. Better to be poor Europeans than well fed ex-Soviets.

Part of me admires this very much, but it makes another part of me queasy. The protesters are mostly younger and better off than average; do they really speak for elderly pensioners and unemployed miners? Is it their right to condemn a few million of their fellow citizens to poverty in pursuit of abstract political goals? Does anybody in Greece now think the Euro was a good idea? To me it all smacks a bit of metaphysics, of putting lofty abstractions above the realities of life.

I worry that the grand project of Europe will be wrecked by economic turmoil. After all, it is a lot to ask of young people that they sacrifice their economic well being for the schemes of well fed, fully employed politicians who seem to care nothing about their fates. Today's European politicians seem a sorry lot to me, with no vision but the one they inherited from the post-World War II generation, no stirring words, and no plans for the economy but more austerity. They seem to be pursuing unification because they can't think of any other issue worth devoting their careers to. But they would rather pursue their goals in back rooms with bankers than by making their case to the public. As long as he economy sputters and leadership void continues, nationalists and fascists will continue to get more support, and somewhere at some point they may even win an election, throwing a big wrench into the whole experiment.

If the people of Ukraine want to join the ongoing muddle that is "Europe," that is their right. I am not sure, though, that it is really wise, and I wonder about the future of a Europe that stands for nothing but a fading concept of itself.
Posted by John at 7:54 AM