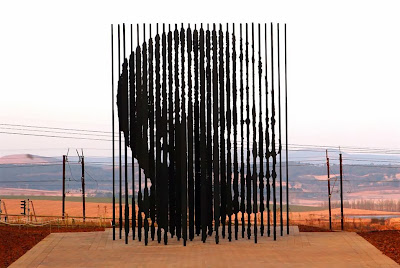 Trivia question: what did Nelson Mandela and Timothy McVeigh have in common?

Answer: they both copied out the poem Invictus while in prison.


Out of the night that covers me,
Black as the pit from pole to pole,
I thank whatever gods may be
For my unconquerable soul. . . .

Where, then, is the difference between the revolutionary we condemn and the one who wins the Nobel Peace Prize? Both bravely fought for what they believed in. How would you answer a cynic who said that it's just perspective: one was bombing us, the other bombing people we don't like?

We can puff ourselves up and say that Mandela fought for justice and McVeigh for something else, but I honestly don't feel comfortable leaving it at that. Justice is a strange abstraction, hard to put your finger on -- maybe the end of apartheid was a straightforward increase in justice, but things are rarely that simple. Both Lenin and Mao fought against oppressive, unjust regimes, but that does not necessarily make them heroes.

I want to think in less abstract terms. Instead of weighing justice vs. injustice, I want to ask about people. I have noticed that to be a revolutionary requires a certain sort of mind, and that most great revolutionaries have been pretty crummy people. John Brown. Robespierre. Simon Bolivar. Fidel Castro. Lenin.

What is it that set Mandela apart? And George Washington, the revolutionary leader he probably most resembles? How were they able to take the lead in revolution yet remain free of hatred and madness, and adapt readily to the ordinary politics that came after the revolution was over?

Leaf through a few pages of Mandela quotes and you discover that he mainly said blandly positive things, slight variations of the lines of other famous wise men. Things like:


Let freedom reign. The sun never set on so glorious a human achievement.


There can be no keener revelation of a society's soul than the way in which it treats its children.

Mandela was equally conventional in Xhosa, his native language, regularly spouting traditional axioms and citing old folktales. George Washington was in some ways an equally conventional person. Both adopted certain radical ideas, but they remained firmly rooted in traditional identities: Mandela a man of the African countryside, Washington a Virginia planter. Both were also from the elite of their societies; Mandela learned politics from watching his father and other traditional chiefs settle disputes about grazing rights. Did this help them draw the line between change that was necessary and more radical changes that had to be put off in the name of re-establishing order and consensus? One of the most striking things about both the American and South African revolutions was how much they left unchanged, and I believe that this was the key to their success.

Both Washington and Mandela were also quite vain in minor ways, for example paying great attention to how they dressed and carried themselves. This strikes me as another conventional trait, a sign that though circumstances forced them into revolution they were at heart ordinary politicians.

Another trait Mandela and Washington shared was a preference for the practical over the theoretical. Of course any revolution must be rooted in theories of justice and of politics. But many revolutionaries have had a weakness for imposing metaphysical concepts on the world that is incompatible with the messiness of ordinary human life. Pol Pot was the extreme example of such a leader, but others from Savanarola to Mao let their theories drive them to cruelty. Edmund Burke took the measure of this fault in the person of Robespierre, and he wrote:


Nothing can be conceived more hard than the heart of a thoroughbred metaphysician. It comes nearer to the cold malignity of a wicked spirit than to the frailty and passion of a man.

Mandela kept theory in its place. He was, acquaintances said, a man of action rather than an ideologue; the same could be said of Washington.

But I think the key difference was in the heart. Mandela was, I think, about the kindest person ever to become a famous leader of nations. He had vices, but cruelty was not one. Washington had the hardness necessary to lead men into battle, but he was also remarkably kind for a man of his position. Indeed he might have been a more successful general if he had cared less about his soldiers, since he was always dreaming up elaborate maneuvers that would spare them face to face struggles with veteran British regiments. Nor did either man have much place in his heart for hate. They were motivated instead by more positive emotions: by the things they wanted to defend and preserve and make real. They were also motivated by personal honor and the ambition, not to be the most powerful man, but the one others thought of most highly.

Pundits are always decrying negativity in politics; this has become part of the conventional pose of the American centrist, most of which I find monumentally annoying. But they are right about the danger of political hate. It is the fire that ravages democracy, the maelstrom that sucks unmoored nations down into civil war. It is good to reflect on this, whenever we find ourselves enraged with the opposition. Sometimes we must fight against particular policies or leaders, but we should always be positive in our hearts; we should always be fighting for the world we want, and we should be willing to work with anyone who can help us get there. In prison, Mandela kept his focus on the South Africa he wanted, never distracted by hate for the men who had jailed him. So here I think is the real difference between Nelson Mandela and Timothy McVeigh: McVeigh acted from anger and hate, Mandela from love.

Just as America was lucky in George Washington, South Africa was lucky in Nelson Mandela. He was no saint; he was a politician. But he led with hope rather than hate, and he always stood for freedom rather than just against apartheid. In his famous defense speech, in his 1956 trial, he said that he was perfectly willing to die for freedom but preferred to live for it. He did, and the world was better for his life. Here is Mandela speaking to the Irish Parliament:


It could have been that our own hearts turned to stone. It could have been that we inscribed vengeance on our banners of battle and resolved to meet brutality with brutality. But we understood that oppression dehumanizes the oppressor as it hurts the oppressed. We understood that to emulate the barbarity of the tyrant would also transform us into savages. We knew that we would sully and degrade our cause if we allowed that it should, at any stage, borrow anything from the practices of the oppressor.