Scientism vs. Humanism, Pinker vs. Wieseltier 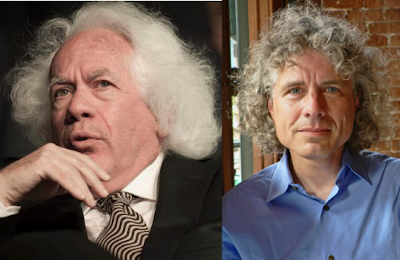 Earlier this year The New Republic hosted a debate between Steven Pinker and Leon Wieseltier about the proper relationship between science and the humanities, and David Brooks gave this one of his journalism awards. I found it fairly interesting, although as much for what is not said as for what is.

Pinker leads off by noting that many philosophers and historians of earlier eras were very interested in science, kept abreast of new discoveries and even offered their own scientific theories (Hume, Descartes, Locke, Kant, etc.) Pinker wants to bring this world back; he wants humanists to know the science of our day as well as Locke or Plato knew that of their own times and to incorporate this knowledge into their work:


One would think that writers in the humanities would be delighted and energized by the efflorescence of new ideas from the sciences. But one would be wrong. Though everyone endorses science when it can cure disease, monitor the environment, or bash political opponents, the intrusion of science into the territories of the humanities has been deeply resented. Just as reviled is the application of scientific reasoning to religion; many writers without a trace of a belief in God maintain that there is something unseemly about scientists weighing in on the biggest questions. In the major journals of opinion, scientific carpetbaggers are regularly accused of determinism, reductionism, essentialism, positivism, and worst of all, something called “scientism.” The past couple years have seen four denunciations of scientism in this magazine alone.

This last gets to Pinker's real motivation for engaging in this debate: he feels aggrieved by all the attacks on science. The title of his first essay is, "Science is not Your Enemy," and he seems offended that anybody should dislike or fear science. But he keeps trying to have things both ways. He says religious people should not think that science is anti-religion, but then he crows that science


requires a radical break from religious conceptions of meaning and value. To begin with, the findings of science entail that the belief systems of all the world’s traditional religions and cultures—their theories of the origins of life, humans, and societies—are factually mistaken.

He says that science is responsible for the modern world, but then takes exception when environmentalists or conservatives blame science for the world's failings. It is all a bit confused, but one thing comes through clearly: Pinker loves science, loves the certain knowledge it can give of the universe, and thinks anybody who doesn't appreciate the beauty and power of science is either a reactionary or a fool.

Wieseltier counters by accusing Pinker of assuming that all knowledge is science. If we really know it, says Wieseltier's Pinker, then it is science, because that is the only way we can really know things. To Wieseltier science is an important way of knowing but not the only one; philosophy, literary criticism, and other humanistic studies also produce knowledge. There are whole fields of scholarship, for example ethics and art criticism, about which science has nothing to say, and he easily pokes fun at certain scientists who have strayed into those realms:


What Pinker [and others] deny is that the differences between the various realms of human existence, and between the disciplines that investigate them, are final. For these scientizers, they are not differences in kind; they are differences only in appearance, whereas a deeper explanation, a scientific explanation, will expose the underlying sameness. The underlying sameness is the presumption of scientism. The scientizers do not respect the borders between the realms; they transgress the borders so as to absorb all the realms into a single realm, into their realm. They are not pluralists. With his uniform notion of intelligibility, Pinker rejects the momentous distinction between the study of the natural world and the study of the human world.

So Wieseltier's real goal is preserving the independence of theology, philosophy, and humanistic scholarship in the face of scientific imperialism. In the short term Wieseltier is certainly correct, since even Pinker admits that science has nothing to add to debates over the origins of World War I, let alone debates about what art is. In the long run Pinker expects all such questions to be subsumed into the science of the mind, but I think history will safely maintain its independence for at least the rest of this century.

Wieseltier also plays both sides of some questions in annoying ways. For example he says that science may have refuted the literal meaning of Genesis, but that very few believers have ever taken what that text says literally. This is false, and it also minimizes the extent to which modern scholarship has undermined religious teachings. Modern science denies the possibility of miracles, denies the existence of non-material beings such as angels or ghosts, denies that the self or soul is in any way separate from he physical operations of the brain. Modern Biblical criticism has, I would say, made it impossible to be certain what Jesus said about anything, and shown that several of the alleged letters of Paul cannot have been written by the man who wrote the Epistle to the Romans. Modern anthropology has shown how many different ways there are of organizing human society, making mockery of phrases like "traditional marriage." More broadly, modern scholarship has undermined age-old certainty, replacing firm faith with probability and flux.

I think about these questions all the time. What I believe about science makes it impossible for me to accept vast amounts of what has long passed for human knowledge. This includes beliefs about gods, spirits, magic and miracles but goes far beyond it. Once you know history and anthropology, you understand that artistic taste is a product of a certain time, place and class, and long-raging debates about the eternal forms of Beauty and Art become downright silly. The same goes for many other cultural artifacts: attitudes about marriage, sex roles, war, honor, and so on lose all firm footing and become merely discussions about preferences.

This is the way I think and the only way I have ever been able to think. And yet I worry about a world without traditional beliefs. Not that I think we are in one now; there is a huge amount of traditional baggage still hanging around in our societies. But what if we lost it altogether? Even the resolutely pro-science Pinker does a lot of dancing around the question of what a thoroughly scientific worldview would mean for us psychologically or as a society. Honestly the results so far are not all that encouraging. The freedom we have created for ourselves has led to as much anxiety as celebration. Religion's central place in life has been taken over, not by science or freedom, but entertainment. The new ideologies of our age -- communism, libertarianism, fascism -- have been uniformly destructive, leaving millions yearning for a past world of less freedom, more certainty, and less stridency. I am not at all sure that people can thrive without the guidance of tradition. But if we all come to understand that our own tradition is just one of thousands, its rules either arbitrary or designed to preserve the power of old elites, can we just choose to live in one anyway?

The pre-scientific world was human in scale, and it assigned great importance to us, our needs, and our place in God's plan. The scientific world is vast beyond our imagining, and in it we are smart apes living on an average planet circling an average star in one of a trillion galaxies. Whether we have any more of a role than bacteria or space dust remains an open question. Can we live with that? If we really incorporated that understanding into everything we think and do, where would we be?
Posted by John at 3:09 PM

I've always found "many kinds of truth" arguments like Wieseltier's deeply unsatisfying. They seem to me obvious cant designed to smother challenges to the traditional division of academic departments and traditional liberal arts requirements, and preserve their funding--which I'm all for as a goal. I'm just not blown away by the force of such arguments' truth.

I suspect that ultimately our science of humanity will be so sophisticated that we will be able to understand the origins of World War I on a molecular level. I don't find this scary, nor does it make me feel irrelevant as a historian. On a philosophical level, I regard my work as mainly making observations and offering partial hypotheses and maybe gaining a few fleeting glimpses of possible truth, which I then mangle in an attempt to express them in language (as I think anyone in my profession does, be they ever so brilliant). Somehow I don't think that, even when we've come to understand events on a molecular level, this will make many people who would be otherwise interested simply give up on history. People will always want things that strike their imaginations--even when they know that somebody understands their imaginations in a biochemical way. And what else, after all, is entertainment, but something that strikes the imagination? (And, even at its most austere, is not religion a way of striking the imagination--hence entertainment? It seems to me many of our forms of entertainment--music, sports, dance, drama, comedy--started out as religious expressions.)

Will universities always be able to persuade society pay and pay for the humanities? Perhaps not as such--but that is not the same as ceasing to see the need to train some folks in some semblance of relatively sophisticated communication and argument.