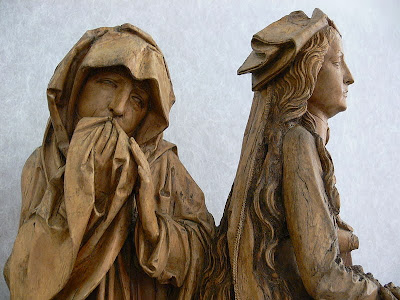 Tilman Riemenschneider (c. 1460-1531) was a German sculptor and woodcarver of the late Gothic. He was born in Heiligenstadt, but when he was about five his father had to flee town because of a political dustup, and he grew up in Osterode. In the late 1470s he took to the road as a wandering apprentice, learning the trades of sculpture and painting. Based on the style of his early work and certain documentary hints, he may have worked in Strasbourg and Ulm. In 1483 he settled in Würzburg where, on December 7 of 1483, he joined the Saint Luke's Guild of painters, sculptors and glass workers as a painter's assistant. 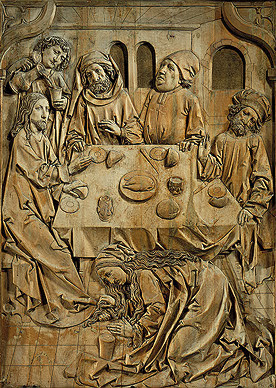 Christ in the House of Simon from the Münnerstadt altarpiece, 1490-1492

In 1485 Riemenschneider made the classic move of an ambitious journeyman by marrying a master's widow, Anna Schmidt. This marriage brought him the property he needed to set up his own workshop, along with three children to support. Through talent and hard work he built up a practice, and by 1490 he was receiving major commissions from towns and churches. 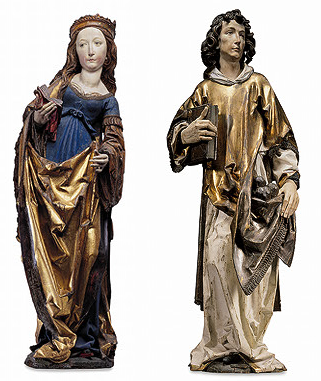 By 1504 Riemenschneider was a successful businessman with an outstanding artistic reputation, employing as many as 40 assistants in his shop. In that year he was made a councilman of Würzburg -- he had arrived. He served on the council until 1525, and between 1520 and 1524 he was also the mayor. (Above, a female saint from c. 1505, and Saint Stephen from 1508). 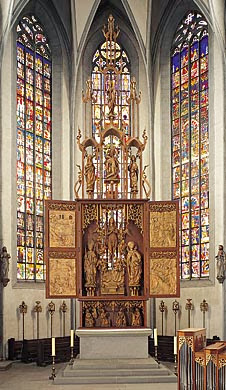 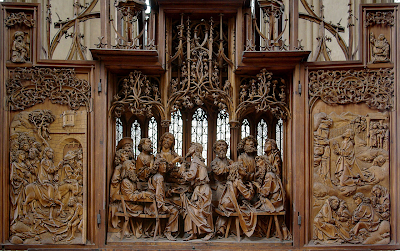 Unfortunately, this embroiled him in a century-old conflict between the townspeople and the Prince-Bishop of Würzburg, whose residence, the Marienberg fortress, overlooks the city. Because of this ancient enmity, and the stirrings of Protestantism, the townspeople supported the peasant uprising of 1525. When the peasants were crushed -- 8,000 were killed in two hours in a battle outside the walls of Würzburg -- the leaders of the town shared in the ruin of all. Riemenschneider and his fellow councilors were imprisoned in the bishop's fortress and tortured. Legend has it that Rimeneschneider's hands were so maimed by the torture that he never worked again, but this appears to be a much later story. Really the bishop ended Riemenschneider's career by confiscating all of his property and arranging for all the cities and churches of central Germany to boycott him. He received no more commissions. (Above, overall view of the Münster altarpiece, showing the theatrical production of these works, and the central scene from the Rothenburg altarpiece.) 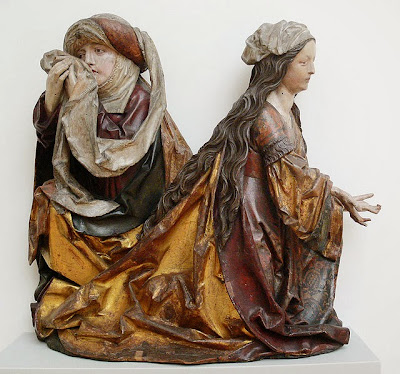 Riemenschneider's early work was mostly painted. However, winds blowing northward brought the new styles of the Italian Renaissance even to the smallest towns of Germany, and by 1510 most of Reimenschneider's work was left uncolored -- compare this version of women weeping for Christ with the later one that that heads this post. 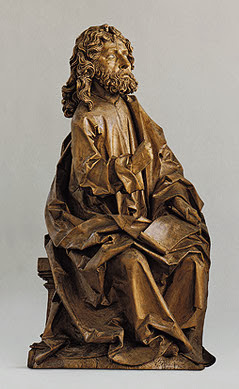 Description of Riemenschneider's technique from the National Gallery:


Riemenschneider’s favored material, limewood, or linden, is especially suitable for sculpture, since it has a homogeneous texture, making it easier to carve than oak and other woods with a pronounced ray structure. A standing figure was typically carved from a halved section of a tree trunk, clamped horizontally in an adjustable workbench that allowed the block to be rotated.Working from this angle, the sculptor saw the figure in strong foreshortening, much as the viewer would when the finished work was installed above eye level, thus he could compensate for visual distortions by adjusting the proportions and modeling.

The sculptor roughed out the form with a variety of tools after marking the contours of the figure on the block with calipers and compasses: two types of axes, curved and straight adzes used in an overhand chopping motion, broad chisels, and mallets. Various chisels and gouges were used for the elaboration of forms. Certain parts of a figure, such as hands, attributes, and protruding folds of a drapery were carved separately and attached to the figure with dowels. The backs of figures were normally hollowed out to prevent the wood’s cracking as it aged. The carvings were meticulously finished with knives and scrapers, exploiting the contrast between broad, smooth areas and incised details. Last, decorative patterns were either appliquéd or were cut or pressed into the surface with punches. Before a figure left the sculptor’s workshop, the eyes and lips were often tinted. 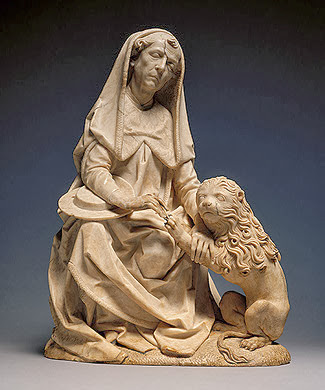 Herman Hesse wrote this of a statue of Mary in the St Bernard church in Würzburg:


Dreamily she gazes out from her glass case, far away from our world... in her gracefulness and distinction she is refined to a degree of perfection far above that of mankind today. 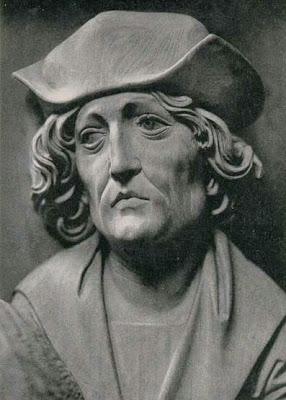 Above, Riemenschneider's self portrait as the man of sorrows.
Posted by John at 7:38 AM