NASA's Budget and the Europa Clipper 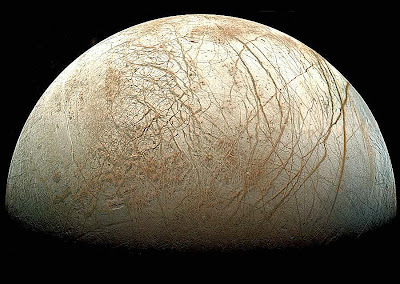 One of the good things that happened while the Bush and Obama administrations were resolutely not caring about the budget deficit was that NASA got plenty of money. The Cassini mission to Saturn, the Mars rovers, the new space telescope -- all very expensive, and all well funded during the profligate 2000's. Now that a new breed of Republican has come to Congress, determined to rein in government spending, that is changing. The sequester cut $2 billion off NASA's budget, and next year will see another cut. At the moment NASA's budget doesn't even include money to keep the hugely successful Cassini and Curiosity missions going past September 30. Most likely the money will be found to keep them alive, but proposed future missions are seeing at least delays and maybe cancellations. 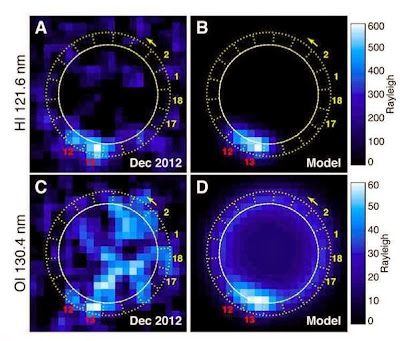 The future mission that I care about goes by the name of the Europa Clipper. Europa is a large moon of Jupiter that seems to have an enormous ocean of water underneath thin crust of ice. Recent observations by the Hubble Space telescope (above) showed that Europa is surrounded by variable clouds of water vapor, and the only explanation anyone can think of for this is that Europa must have geysers that blast some of its ocean water into space, just like those that Cassini photographed at Saturn's moon Enceladus. This opens up the possibility of an affordable mission to study that deeply buried ocean:


Europa is covered with a shell of ice. It has an internal source of heat from the tidal forces exerted by Jupiter. Europa races around Jupiter in an elliptical, 3.5-day orbit. When the moon is farthest from Jupiter and the gravitational squeeze of the giant planet eases up, the icy shell decompresses just enough to let subsurface water find a path to the surface and vent into space, scientists believe. They say the subsurface ocean could be 50 miles deep at least, containing more water than in all the oceans on Earth.

“This is huge,” said JPL’s Robert Pappalardo, who has worked on plans for the Europa Clipper. “It now means that we could effectively sample Europa’s interior from flybys.” 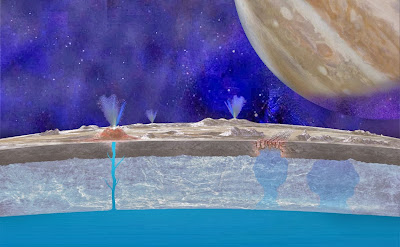 Jupiter's neighborhood is what NASA engineers call a "challenging environment," because of its powerful gravitational field, the perturbations induced by its four large moons, and the intense radiation it emits The initial cost estimate for a Europa orbiter was $4.7 billion, or NASA's whole planetary science budget for four years. So they are talking about cheaper scenarios:


Rather than orbiting Europa, the spacecraft would go into an orbit around Jupiter, spending most of its time outside the planet’s radiation field, and then swoop in repeatedly, with 34 flybys of Europa and nine of the moon Ganymede.

I think this should be our top priority in space exploration, far above the dismal International Space Station or the fantasy of a manned mission to Mars. But right now the "budget environment" is even more challenging than the environs of Jupiter, and the Europa Clipper may not fly for decades.
Posted by John at 7:13 AM