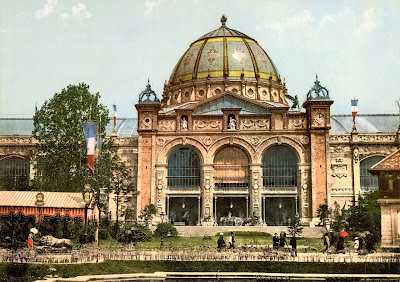 I am fascinated by the great World's Fairs of 1850 to 1939. Next to wars, these expositions were the greatest enterprises of the age. Their organizers built whole towns of enormous, highly decorated buildings set in sumptuously landscaped parks, filled them with the best technology and what they considered to be the best art of their times and opened them to anyone who could afford the modest admission price. Kings and queens attended, but so did millions of shopkeepers and farmers. 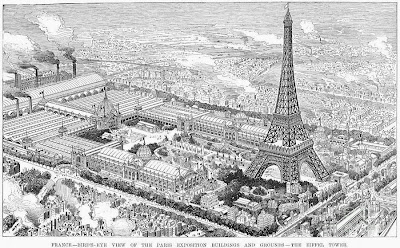 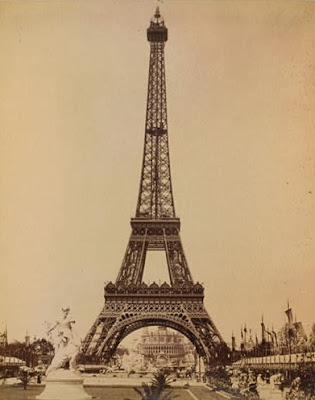 I begin a series of posts on these fairs with one of the most famous, the Paris Exposition of 1889. Held on the 100th anniversary of the storming of the Bastille, this expo is best known for giving us the Eiffel Tower. Gustave Eiffel's great iron tower was at that time the tallest building in the world. It certainly provided a striking centerpiece for the fair, but a wide swathe of Frenchmen hated it. The critics came mainly from two groups, Catholic conservatives who didn't want to memorialize the Revolution at all, certainly not with a monument they could not avoid seeing every day, and artists. A long roster of artists and architects put their names to a protest letter:


We, writers, painters, sculptors, architects and passionate devotees of the hitherto untouched beauty of Paris, protest with all our strength, with all our indignation in the name of slighted French taste, against the erection…of this useless and monstrous Eiffel Tower.

The tower stayed, of course, becoming in time one of the world's most famous images. 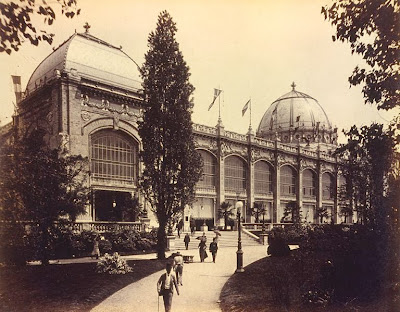 The exposition was much more than just the tower. In enormous buildings around the Champ de Mars were displayed the latest productions of European and American industry and art. There was even a full-scale reconstruction of the facade of the Bastille. 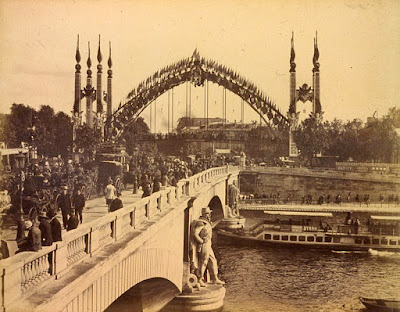 There were objects by the thousands, but much more than that: theater, music, and dance were performed on a dozen stages. Exotic dance acts, including Egyptian belly dance, Hawaiian hula and Balinese dance were especially popular. 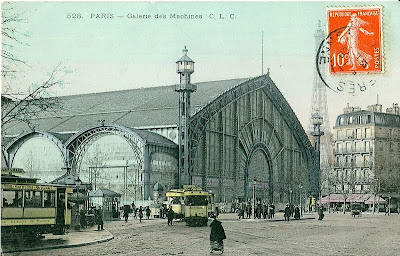 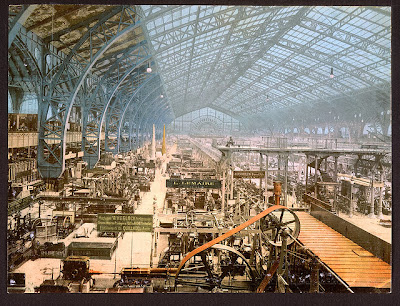 In the palace of machines visitors could see the latest power looms, metal lathes, printing presses, steam engines, railroad locomotives, and more; the whole was lit with electric lights. The building's innovative steel arch roof spanned 110 meters (350 feet), the widest vaulted ceiling in history. Many critics raved about this enormous space; Baron Hausman called it a cathedral for the modern age. 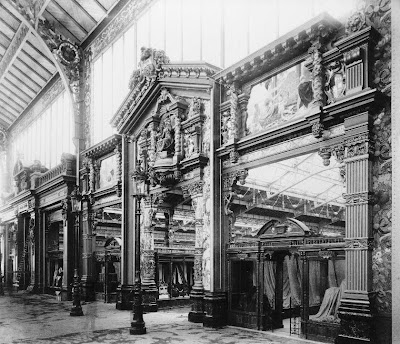 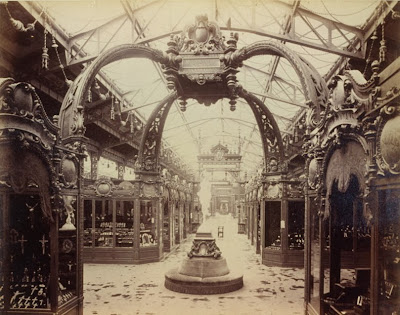 The spectacular Pavilion of Diverse Industries showcased consumer goods from around the world. The fabulous decoration lavished on the temporary buildings amazes me. 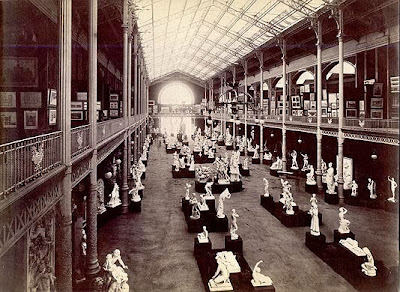 In the Palace of Arts were paintings, sculptures, and more, including works by the leading artists of the time. 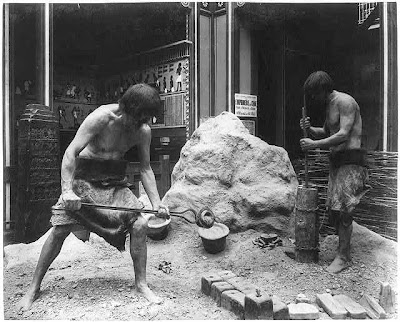 Even the latest findings of archaeology were displayed, as in this diorama of ancient bronze casting. This was part of an enormous exhibit on the History of Labor. 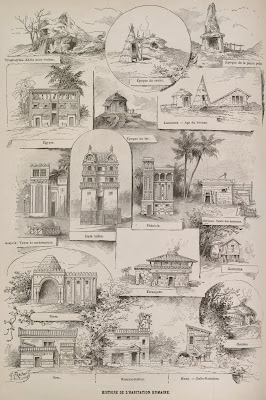 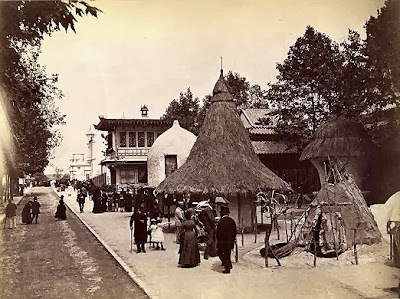 One very popular exhibit was newly built "typical" houses from 44 different times and places in history, all designed by architect Charles Garnier with help from a classics professor named Amman. Above are a broadsheet guide to half the dwellings and a photograph of those from Africa and Lapland. These fairs were among the main ways that knowledge of the world was spread to ordinary Europeans and Americans, not just directly but indirectly through the legions of journalists and teachers who attended.

Buffalo Bill's Wild West Show appeared, featuring Annie Oakley's shooting act and a reenactment of the Battle of Little Bighorn, the Indians under the command of Sitting Bull. 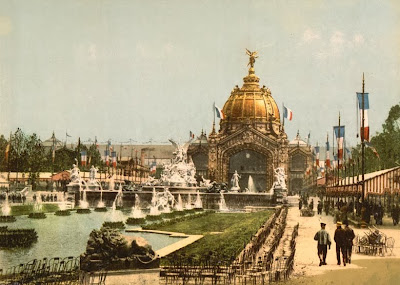 The grounds and gardens were spectacular. 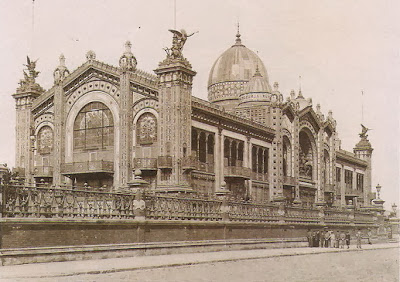 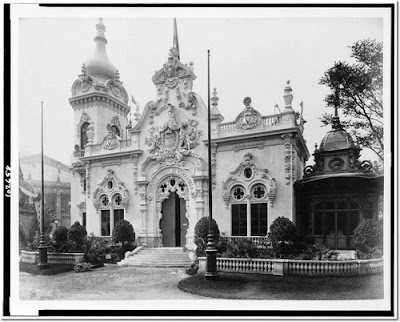 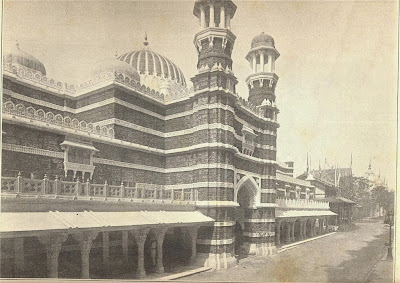 Thirty-five countries contributed buildings; above, those for Argentina, Venezuela, and India (paid for by maharajas, not the British). 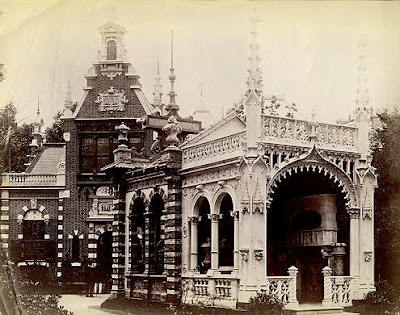 Many businesses also set up small pavilions; above is that from Brault, famous potters; the structure is built entirely of ceramic. 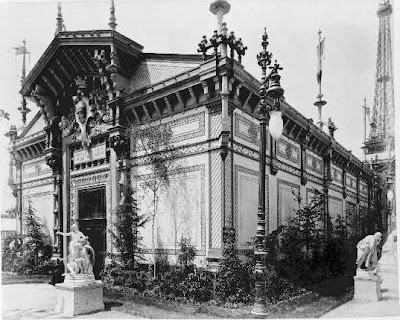 The pavilion of the city of Paris. 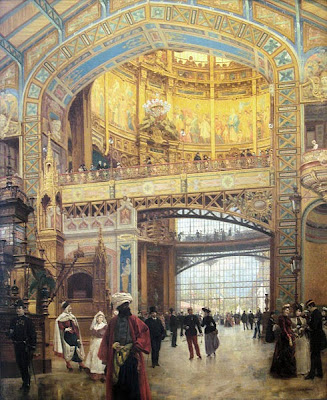 The Exposition was an astonishing success, with 32 million paying visitors. Each paid one franc; with concessions and other forms of revenue the total take was nearly 50 million francs, well above the 41 million franc cost of staging the event. The scale of the event,and its profitability, inspired future fairs to aim for even bigger splashes, spending even more money and hoping to take in even more as well.
Posted by John at 7:08 AM