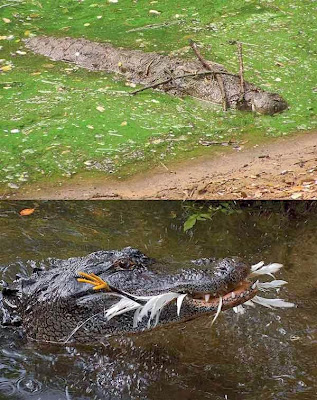 It seems that both alligators and crocodiles sometimes use sticks to lure nest-building birds to their dooms:


In 2007, behavioral ecologist Vladimir Dinets noticed that mugger crocodiles (Crocodylus palustris) at a zoo in India would balance small sticks on their snouts near a rookery where egrets compete for sticks to build their nests. Once, one of the crocs lunged at an egret that approached. Intrigued, Dinets studied alligators (Alligator mississippiensis) at four sites in Louisiana. The alligators put sticks on their snouts (upper photo) much more frequently near egret rookeries and during the nest-building season, he and colleagues report online in Ethology Ecology & Evolution. Although Dinets, now at the University of Tennessee, Knoxville, observed only one attack over a year, two co-authors who have worked for 13 years at a wildlife park in Florida have seen multiple attacks after alligators lured birds with sticks. “It does not surprise me at all,” says J. Whitfield Gibbons, a retired herpetologist, speaking on his cell phone from a swamp near his cabin in Aiken, South Carolina. “Alligators are amazing creatures.”