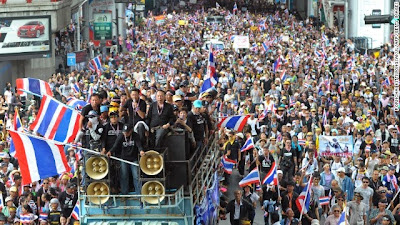 Jackson Diehl takes note of the anti-democratic trend among the global middle class:


The crowds who called for revolution in Cairo, Istanbul, Bangkok and Kiev this year are not the impoverished losers of globalization. They are, for the most part, the economic winners: middle-class, educated, secular, English-speaking. They’ve had the backing of big businessmen who have been enriched by trade, and, as often as not, the sympathy of the Obama administration and other Western governments.

So why are they rebelling? Because globalization is not merely an economic story. It is accompanied by the spread of freer and more inclusive elections to dozens of countries where they were previously banned or rigged. That has enabled the rise of populists who cater to globalization’s losers and who promise to crush the old establishment and even out the rewards. In country after country, they’ve succeeded in monopolizing the political system. Hence, the elite revolt.

Hugo Chávez, elected in Venezuela in 1998, was a pioneer of this trend. He was followed not just by other Latin American caudillos, but also by Recep Tayyip Erdogan in Turkey, Thaksin Shinawatra in Thailand, Viktor Yanukovych in Ukraine and Mohamed Morsi in Egypt, among others. Yes, these rulers have many differences. But they have some big things in common: Their support comes disproportionately from poorer, less-educated and more rural voters, while their opponents are concentrated in cities, especially capitals. The populists are also good at winning elections, but bad at governing — except when it comes to delivering spoils to their followers.

I think that last is unfair; Certainly Morsi and Chávez were pretty bad, but if Erdogan is too authoritarian for my taste he is not otherwise incompetent -- the Turkish economy is doing fine -- and Shinawatra's opponents have hardly given her a chance to run the country. The situation in Ukraine is complicated by ethnic issues (the country contains millions of Russians) and the country's position between Russia and the EU. The real issue is not competence but differing interests. Crafting a political system that creates real government legitimacy in a polarized situation is hard even in old democracies like ours.
Posted by John at 8:26 AM