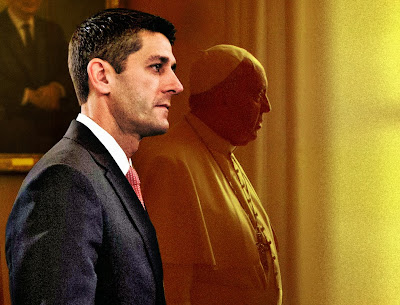 McKay Coppins has written a fascinating article about Paul Ryan's turn from Ayn Rand to Pope Francis. According to Coppins, while Ryan was Romney's running mate he spent a lot of time fighting with the campaign about where he could go and who he should see. Ryan wanted to visit poor and minority neighborhoods, but the campaign staff "countered that every hour spent on inner-city photo ops was a lost opportunity to rally middle-class suburbanites who might actually vote for them." Eventually they let Ryan do one event, meeting a group of people who work with the poor and giving one speech in a poor Ohio neighborhood:


By the time Ryan arrived backstage at the Waetjen Auditorium less than two weeks before the election, about a dozen advocates for the poor were waiting for him. They took turns telling stories from the front lines of the losing war on poverty. They spoke of their own experiences with addiction and homelessness. They testified of redemption. And then, as Ryan prepared to leave to deliver his speech, a tattooed minister who had arrived at the meeting via motorcycle asked the congressman if he could lay hands on him to pray.

Secret Service agents tensed up as the group surrounded him and the man placed his hands on Ryan’s shoulders — inches away from his neck, a nervous aide noted later. The candidate made the sign of the cross, and the minister called on the power of God to give Ryan strength, and help him fulfill his divine mission. Several people present, including Ryan, became emotional. Ryan left the meeting, gave his speech, lost the election, and returned home to Wisconsin. But several weeks later, he couldn’t stop thinking about that prayer. Speaking with a close aide, he said it was the most powerful experience he’d had during the campaign — and that he felt strongly he needed to act on it.

“This is my next ‘Roadmap,’” Ryan told the aide, referring to the name of the audacious conservative budget that had made him a star in Washington. “I want to figure out a way for conservatives to come up with solutions to poverty. I have to do this.”

Lately Ryan has spent a lot of time defending Pope Francis to other conservatives and  arguing that the Pope has something important to say. Most on the left are cynical about Ryan's alleged conversion, which they think sounds like a campaign narrative. I am not; I am perfectly willing to believe that Ryan has been inspired by his faith to want to help the poor and struggling. The thing is, though, Ryan remains a staunch small government capitalist, whose idea of helping the poor still revolves around 1) cutting taxes and regulations to create economic dynamism and more jobs, and 2) volunteerism, especially through churches. As he said in a graduation speech at a Catholic university,


Concern for the poor doesn’t demand faith in big government. It demands something more from all of us. If we continue to believe that the war on poverty is primarily a government responsibility, then we will continue to weaken our communities. We will drift further apart as people.

Which I think is nice but beside the point. The problems of a $10-trillion-dollar capitalist economy are just too big, its victims too many, for anything but government action to fundamentally change their circumstances. Earlier this year Ryan's party was trying to cut food stamp benefits by $39 billion dollars over ten years, tossing somewhere between 2.8 and 6 million people out of the program. That's a lot for charity to make up. Or consider this: about two million American work for minimum wage, another two million for a dollar more. If the minimum wage were raised by $2, that would collectively increase their incomes by $6 billion a year. Does Ryan think he can raise that much by staging photo ops with community organizers? What does he plan to do about the 40 million Americans without health insurance?

Let me reprise this lovely table which explains why there are fewer poor people in Scandinavia: 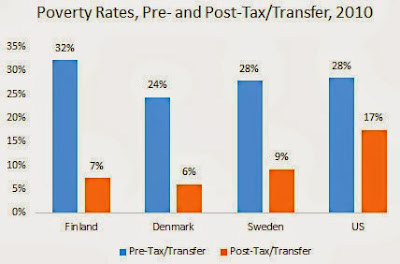 It's really quite simple: there is less poverty in Scandinavia because their governments do more for poor people. Nobody has ever figured out how to arrange a capitalist system to give good jobs to everyone. Capitalism needs low-wage workers. In fact, these days it seems to have no need at all for millions of people. The only way we know to lift millions of people out of poverty is massive government spending. Until Ryan accepts that, he will never do anything but nibble around the edges of poverty.
Posted by John at 9:06 AM