Two of these strange objects were found in 2009, during archaeology in advance of highway construction near the River Eden in far northwest England. 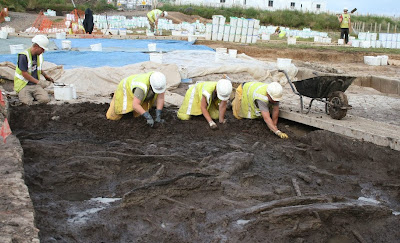 Old channels of the river had become bogs, preserving much organic material. 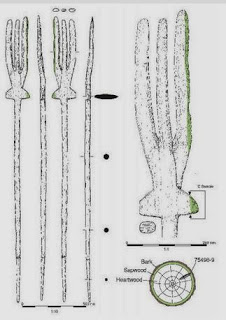 Four similar objects are known, two from Ireland and two from the same part of England. All have been found in bogs. Nobody knows what they are, and the discoverers of the latest pair went all out to solve the mystery without result. They are not really much like any documented medieval tools, and they are not worn from use.

The context of these finds seems interesting to me:


a later Neolithic phase of activity starting in the early part of the fourth millennium cal BC comprised the construction of a wooden platform and other structures in a channel and the accidental or deliberate deposition of various wooden and stone artefacts. This included the two large wooden tridents, several polished axeheads and fragments of polissoirs (stones for polishing stone axeheads).

That sounds like a ritual deposit to me, given that Europeans were always throwing stuff into rivers as a way of offering it to the gods. Which makes me wonder if these are ritual objects, like the magical forked sticks that show up in certain medieval stories.
Posted by John at 8:08 AM