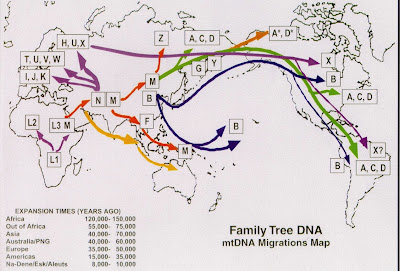 I was impressed yesterday by two recent studies of DNA from old skeletons in Europe that both found great diversity in mitochondrial DNA (the kind that passes only through the female line). One involved six individuals from the Neolithic Rössen Culture of Germanay, ca. 4500 BCE; these six people fell into four different mtDMA lineages, H5, HV0, U5, and K. This was already a mixed population.

The second study was of eight individuals from a Merovingian graveyard in southwestern France, 7th to 8th century CE. These eight individuals came from six different mtDNA lineages representing five of the nine haplogroups known in old Europe: J, H, K, X2 and W. This is a remarkable degree of mixing; by early medieval times, eight people from one French graveyard expressed a majority of Europe's genetic diversity. This is powerful evidence for the movement and mixing of peoples on a large scale, exactly what the traditional picture of European history and prehistory predicts. Evolution in place of people who had been there since the Neolithic, as imagined by some 20th-century archaeologists, absolutely could not under any scenario yield diversity like this.
Posted by John at 7:22 AM