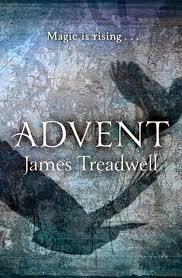 James Treadwell is a 40-something English scholar of 18th-century literature who threw it over to write fantasy novels, and Advent (2012) is his first book. I found it interesting and creative but flawed.

The plot concerns the return of magic to an unsuspecting contemporary world, an event that seems to have much in common with the apocalypse. The overall tone is dark, with lots of black clouds and few sunbeams. The main character is a teenage boy who is considered deranged because of his visions, but just you wait. There also much about the famous Johannes Faust (back in the sixteenth century), an immortal prophetess, various dotty moderns who also turn out to be wiser than they seem, a magic ring, an old house in Cornwall that is not really in Cornwall after all, and a wall full of primitive masks that hide many amazing things. The story incorporates familiar mythic elements and quite a few fantasy conventions, but not in an irritating way. It was different enough to intrigue me and well enough written to hold my interest.

I did not love it because it relies heavily on two techniques I dislike: descriptions of action that are deliberately obscure, so the reader has no idea what it going on, and characters who advance the plot by behaving irrationally. This is not false to the characters, who are all considered bonkers by those around them and honestly are none too sane even if their visions are real, or to the story, since much happens that is so weird and baffling you can't blame people for freaking out. But I just don't enjoy reading that sort of thing very much.

I suppose my overall comment is that I already have the second volume of this series, Anarchy, and started reading it this morning.
Posted by John at 7:29 AM