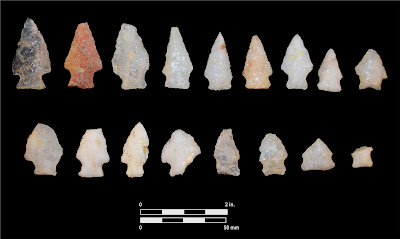 I am working on the report for the excavation I did last summer in Virginia, and I just received these lab photos of some of the stone spear points and knives we found. Above are Halifax points, ca. 4300-3000 BCE, and things that might be more Halifax points but then again might not. You can see just from a glance at these that some conform very closely to an ideal type but some do not. In this case if you go across the top row from left to right the second, fourth, fifth, and sixth points are classic Halifax: straight edges to the blade, shallow notches on the sides, flat base. Others look sort of like that but not exactly; still others bear a vague resemblance. This sort of variety is found in most stone tools. The material of most of these is quartz from cobbles, which is usually full of flaws that can distort the final shape. Plus sometimes people just made mistakes. This is why dating points you find on the surface is tricky and archaeologist really ought to be working from stratified sides where objects can be dated by the layer they are found in. 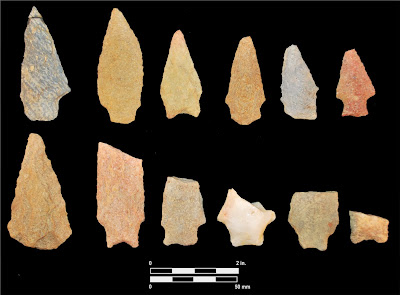