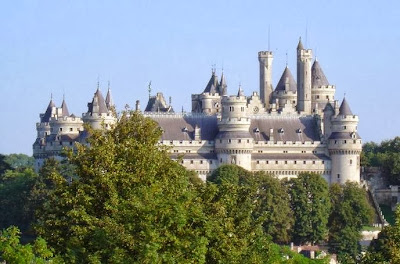 The Chateau de Pierrefonds in northeastern France is a curious hybrid, a real medieval castle that fell into ruins and was then rebuilt by that great nineteenth-century rebuilder of medieval ruins, Eugène Viollet-le-Duc. It was Viollet-le-Duc who put the pointed roofs on the towers of Carcassonne, which never had them, added the most photographed gargoyles to Notre Dame de Paris, placed the spire on the top of Mont Saint-Michel, and was actually responsible for all sorts of other things that have become part of our image of medieval France. 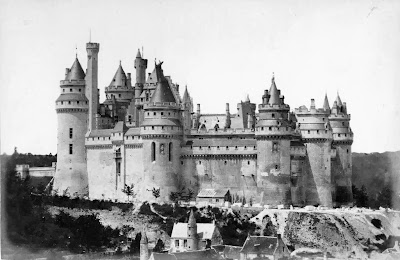 Chateau de Pierrefonds began as a twelfth-century fortress built for the Counts of Soissons. It then fell by inheritance to the kings of France, who made it a key part of their defenses north of Paris. In 1392, Charles VI turned the County of Valois (of which Pierrefonds was part) into a Duchy and gave it to his brother Louis, Duke of Orléans. The Duke had the castle completely rebuilt; it was completed around 1407. 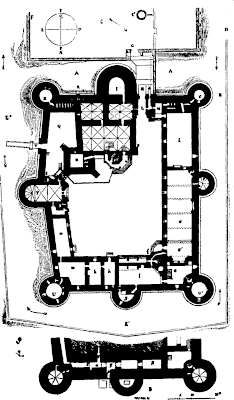 One of the reasons Viollet-le-Duc was interested in the castle was that it represented a major advance in military architecture. During the Hundred Years War the armies had gotten skilled at seizing older castles by sudden assault, sending rather small forces of mounted men on quick raids to attack lightly manned fortresses. Many medieval castles were built with each tower as a nearly separate fort, and the towers were often manned by squads of men from separate towns or districts who sometimes refused to help each other. Attackers were therefore able to concentrate their force and overwhelm a single tower or piece of the wall with nothing but ropes and ladders before help could arrive from the rest of the castle. (The famous constable Bertrand du Guesclin was especially good at this.) Architects responded by raising the height of the outer walls and by improving the connections between the towers, so any point of attack could be rapidly reinforced. As at Pierrefonds, where broad passageways run through all of the walls, with many stairs to the top. Good design did not, however, save the castle from the English in 1420; a spy told them that the castle had been emptied of food to supply other fortresses that were thought to be more vulnerable, so they simply camped in front of the gate, handed the captain an inventory of his nearly bare larder, and suggested surrender would in these circumstances be an honorable option. He concurred. 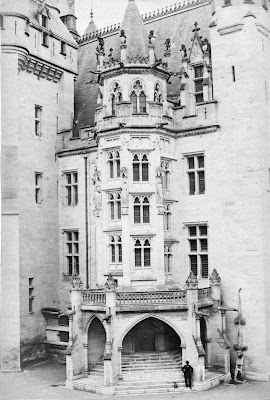 But the castle survived the fifteenth century intact, and after the fighting died down it was luxuriously furnished as a noble residence. In the early 1600s is was held by the Marquis de Coeuvre, alias Captain Pierrefonds. He joined a faction of nobles who opposed the great Cardinal Richelieu, a very dangerous move. The Cardinal sent the Count of Auvergne to attack the castle, not forgetting to send along most of the royal siege artillery. The Count established batteries on two nearby hills and proceeded to smash one of the walls to rubble. When the wall collapsed, the Marquis quickly surrendered. Richelieu ordered that the castle be completely demolished, but in that lax age, things were never really done "completely." 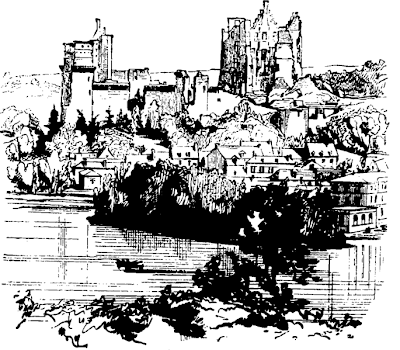 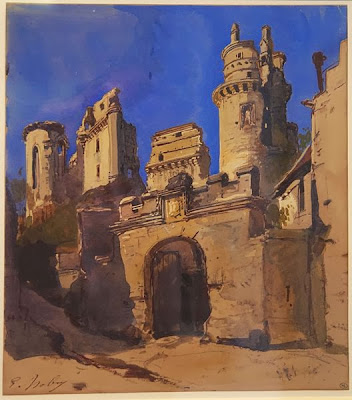 The walls were breached and the roofs removed (to be sold, presumably), and the castle left to molder. By 1857 it looked like this. In that year Napoleon III asked Viollet-le-Duc to undertake the restoration, and with five million francs from the treasury the restoration was particularly lavish. 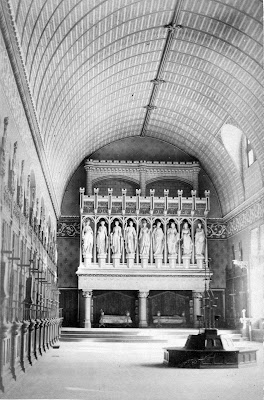 And so it ended up as today's showplace. 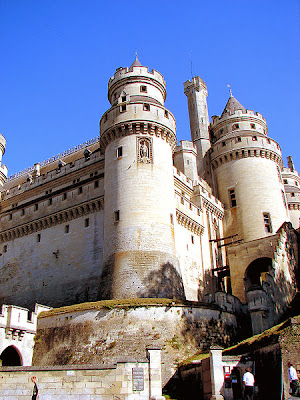 The plan of the buildings is authentic, since the new castle was placed on the foundations of the old. But the looks of the towers is taken more from manuscript illustrations than from the ruins themselves. 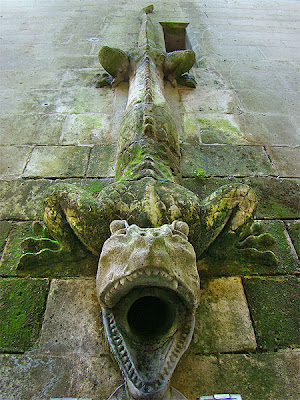 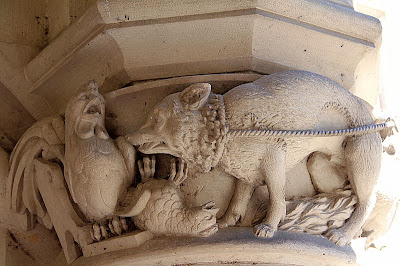 And most of the wonderful details are all Viollet-le-Duc. But still, what an amazing place. 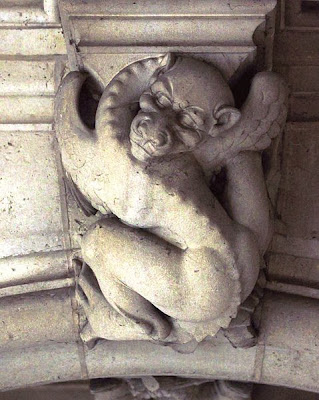