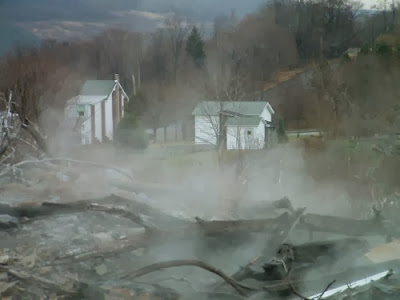 In Centralia, Pennsylvania, a strange episode is unfolding in the ongoing saga of Americans' paranoid suspicion of their own government. Centralia is the site of a famous mine fire, and at least when I drove through there a few years ago there was still a pall of coal smoke hanging over everything. You would think that under these circumstances people would have been very happy to take the government's offer to buy their land and help them relocate somewhere else. But no:


The mine fire was ignited in 1962 and eventually spread to the vast network of mines beneath homes and businesses, threatening residents with poisonous gases and dangerous sinkholes. By the end of the 1980s, more than 1,000 people had moved and 500 structures demolished under a $42 million federal relocation program.

But some holdouts refused to go, even after their houses were seized through eminent domain in the early 1990s. They said the fire posed little danger to their part of town, accused government officials and mining companies of a plot to grab the rights to billions of dollars worth of anthracite coal, and vowed to stay put.

After years of letting them be, state officials decided a few years ago to take possession of the homes. The homeowners fought back with a federal lawsuit. 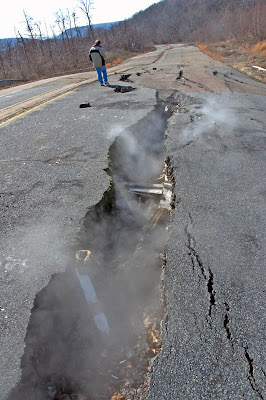 That's right, these brave souls weren't going to give up their smoke-shrouded, in-danger-of-collapsing homes without a fight. The news today is that the state has thrown in the towel and settled with the holdouts, paying them part of the buyout cash but letting them stay in their homes as long as they live. So, a great victory for the little man against big government -- how dare they try to force us off our unstable, toxic property? 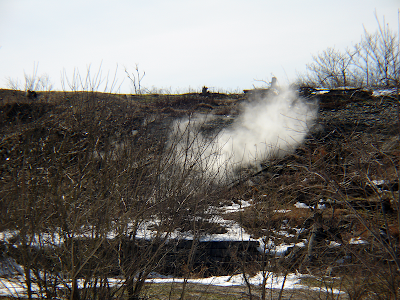 The best part of the story is the weird conspiracy theory that some of these residents have cited in justifying their resistance:


[Resident Tom] Hynoski, who has long contended that government corruption involving the coal rights was behind the state's drive to force them out, claimed vindication. "They bent us, but they didn't break us," he said.

Because coal mines that are burning under ground and too unsafe even to enter to try to put out the fire are actually worth billions of dollars! It all makes sense! The concern the state seemed to be showing for their residents was actually a gigantic scam! 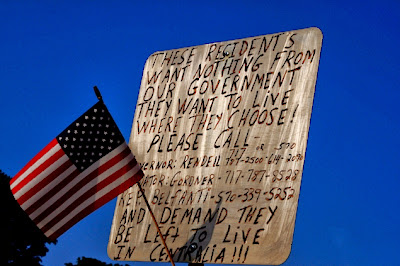 I wonder if any of these people will get cancer from the toxic smoke and then sue the government for not evicting them.

Photo essay of Centralia as it is now here.
Posted by John at 12:08 PM

I drove through in 1985 and already couldn't believe anyone would even consider staying…amazing!