The Ruin of Syria 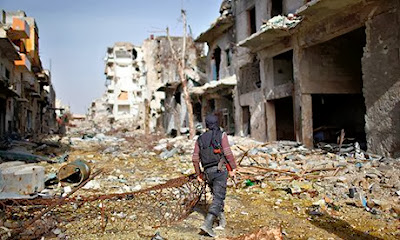 Francesca Borri writes in the Guardian about the experience of being a journalist in Syria:


Since the rise of the Islamist resistance, parts of Syria have become off-limits to journalists – 30 of us are now missing. Today my helmet is a veil, and my flak jacket a hijab. Because the only way to sneak into Aleppo is by looking like a Syrian.

Locals here don't refer any more to "liberated areas", but to east and west Aleppo – they don't show you pictures of their children, or of siblings killed by the regime, but simply the pictures of beautiful Aleppo before the war. Because nobody is fighting the regime any more; rebels now fight against each other. And for many of them, the priority is not ousting Bashar al-Assad's regime, but enforcing sharia law.

Aleppo is nothing but hunger and Islam. Dozens of threadbare children, disfigured by leishmaniasis, walk barefoot in the steps of mothers, covered in black from head to toe – all bowl in hand, seeking a mosque for bread, their skin yellowed by typhus. In the narrowest alleys, to dodge mortar fire, boys are on the right with their toy Kalashnikovs, while the left is for girls, already veiled. Jihadi fathers push with their beards, djellabas and suicide belts. In July, Mohammad Kattaa was executed for misusing the name of the prophet. He was 15.

You know, if we had elected John McCain, we would be in the middle of this mess, trying to sort out the Islamist rebels from some other kind of rebels, battling against Assad's regime but trying to avoid killing his Christian supporters. What a catastrophe. I am actually beginning to think that we should discard our support for those largely imaginary non-Islamist rebels and try to help the Assad government put the country back together. They may be thugs, but was life under their rule as bad as this? I don't know what else to think.


Yesterday, driving to New Orleans, I saw a pick-up truck drive by with this bumper sticker: “Government, stay out of my life”. We have the luxury here in America to entertain the idea that we are oppressed by the government, because we have never had to live in anarchy.