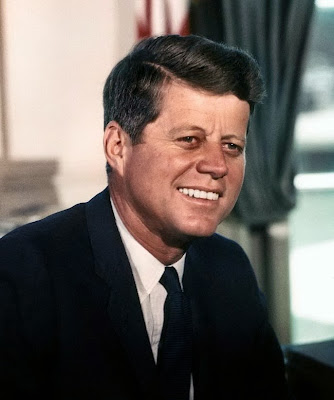 Interesting article by Adam Clymer in the Times on how Kennedy's presidency is treated in the latest crop of high school history textbooks. Where he was once lionized, he now comes in for a lot of abuse. The authors of one textbook


said he “pursued civil rights with a notable lack of vigor.” They blamed him for the missile crisis, saying Cuban-Soviet fears of invasion were stoked by the 1961 Bay of Pigs landing and other United States moves against Cuba. They said Kennedy’s real legacy was “a huge military expansion that helped goad the Russians into an accelerated arms race.”

In 2009, Joyce Appleby’s “American Journey” said of the missile crisis: “While it seemed like a victory at the time, it left a Communist government intact just miles from the U.S. coastline. The humiliation of giving in also prompted the Soviets to begin the largest peacetime military buildup in history.”

And so on. Clymer offers various reasons why this might be true, such as revelations about Kennedy's affairs and the release of White House tapes that show him as a coldly calculating politician.

But the real reason is that textbooks are now written by people of my generation, and we are all sick of the Camelot crap we grew up with. Personally I have never understood why anyone was impressed by Kennedy; his vaunted charm and charisma fall flat with me, and I think his speeches sound phoned in. I think he was a war-mongering tax cutter who posed as a liberal and somehow got away with it. Johnson turned out to have all his belligerent faults, but he was worlds better than Kennedy on civil rights and taking care of the poor and elderly.

I have never taken seriously the notion that Kennedy's assassination was arranged by the military-industrial complex, because it seems to me that he was their best friend. He ran on a program of increasing military spending, bought into the whole "missile gap" thing, and launched the Apollo program. If the military-industrial complex had a secret head, it would have been Kennedy himself. And if some faction of the CIA did kill him, it was probably because they could see he was leading us to disaster in Vietnam.

Not that he was all bad; he did an ok job in the missile crisis, the Test Ban treaty was a good thing, and although he went ahead with the Bay of Pigs fiasco he had the sense to cut off support when it was clear the thing was going nowhere. He was working his way toward civil rights and might have done more eventually. But I still think he was a mediocre president with an inflated reputation. And so, it seems, do my textbook-writing peers.
Posted by John at 7:08 AM