Sitting Bull's Two Wives, or, the Perils of Polygamy 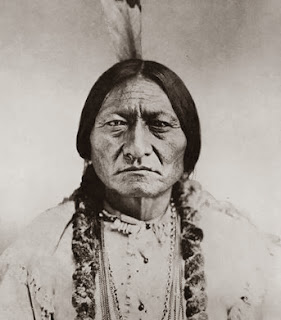 In 1869, Lakota chief Sitting Bull was facing numerous threats to his political influence, and feared his people were splitting into irreconcilable factions. But that wasn't all:


Making matters even worse for the embattled Hunkpapa leader was his domestic situation. His two wives, Red Woman and Snow on Her, did not get along. The simmering tension between the two was bad enough during the day, but at night it became intolerable as Sitting Bull lay sleepless on his back, bracketed by two wives who refused to allow him to turn on his side and face the other.

From Nathaniel Philbrick, The Last Stand: Custer, Sitting Bull, and the Battle of Little Bighorn
Posted by John at 7:18 AM