The Tomb of Queen Arnegunde

In 1959, French archaeologists explored under part of the abbey church at Saint Denis, long the burial place of French royalty. They found a stone sarcophagus of ancient style and opened it up:


The stone sarcophagus held clothing and the remains of textiles-all in a remarkable state of conservation-thus allowing us to reconstruct the garments of a noblewoman from the Merovingian era. 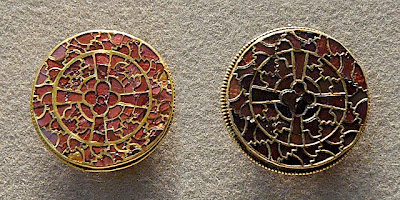 The deceased wore a violet-coloured silk skirt, held in place by a large leather belt that had a sumptuously decorated buckle plate and buckle counter-plate. Her reddish-brown silk tunic, decorated with gold braid, was fastened with a pair of round brooches with a garnet cloisonné decoration. Two small pins and a large garnet encrusted pin held her silk veil in place. Her stockings were held up by garters and the straps on her leather shoes were fitted with small buckles, counter-plates and strap-ends with animal motifs. 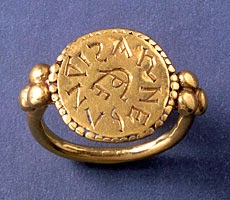 Two sphere-shaped earrings, in imitation of the then reigning fashion in the Byzantine world, completed the lady's rich gold and silver jewelry. On her thumb, a ring inscribed with a woman's given name, ARNEGUNDIS, surrounding a central monogramme that can be expanded to REGINE (queen). It was this same queen Arnegunde, wife of Clotaire I (511-561) and mother of Chilperic I, whom Gregory of Tours had described in the late sixth century.

Arnegunde probably died around 580 CE, at the age of about 70. 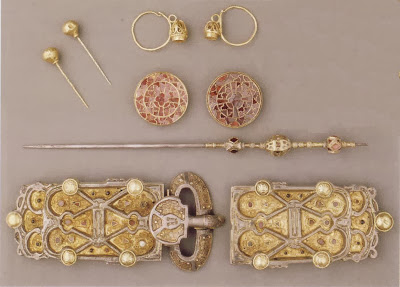 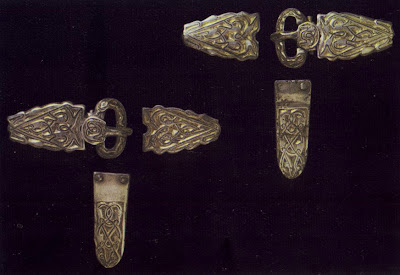 More images of her stuff, jewelry (above) and shoe buckles.. 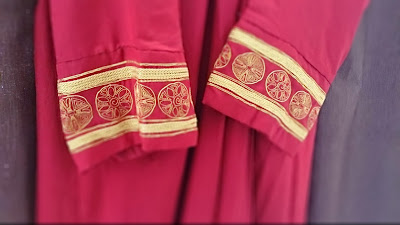 The gold embroidery on her coat cuffs, and a reconstruction. 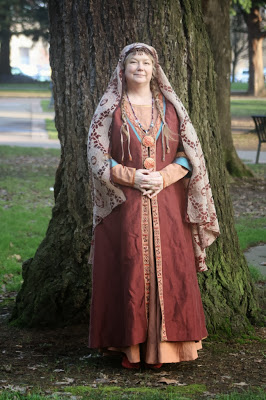 A reconstruction of Arnegunde's ensemble; below, an artist's recreation.