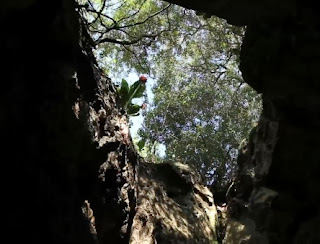 Under the direction of Lee Berger, one of South Africa's leading paleoanthropologists and a National Geographic Explorer in Residence, an expedition is under way at Rising Star Cave in South Africa. This wonderful project is dedicated to recovering new hominid fossils and to carrying out science in a new, completely open way.

The fossils come from a deep chamber that is accessible only through a very narrow passage, too tough a climb for eminent middle-aged anthropologists. So Berger put out a call for people with both caving and excavation skills who are also skinny enough to fit through a crack only 18 cm (7 inches) wide. With the team assembled, the six skinny cavers (all women) started slithering down into the cave on November 6. They immediately reported dozens of fossils on the surface of a chamber 30 m (100 feet) below the entrance. 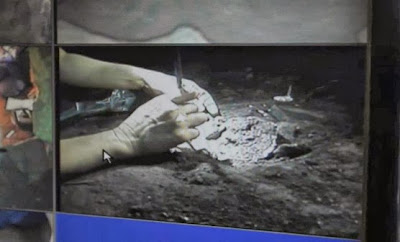 The excavators then carried down cameras that allow the senior staff up on the surface to watch and direct the digs; above, bigwig's eye view of the excavation of a large skull fragment. According to the excavation blog, they have already recovered about 400 possible hominid fossils.

Because this is being reported as it happens, there have been no statements from the crew about what these fossils are, how old they are, how they got into the deep chamber (they may have washed in from higher up), or any of the usual pronouncements that accompany the publication of new fossil finds. I think this is wonderful.

Expedition member John Hawks explains how this approach differs from the norm in the field:

The first publication answers those basic questions, “What species is it?” “How old are the fossils?” “How many individuals are there?” The millions of people who follow paleoanthropology usually find out about the research second- or third-hand, by press release.

That highly controlled approach creates the misconception that fossils come out of the ground with labels attached. Or worse, that discovery comes from cloaked geniuses instead of open discussion. We’re hoping to combat these misconceptions by pursuing an open approach. This is today’s evolutionary science, not the science of fifty years ago.

Hawks then answers some of the questions the anthropologists keep getting via twitter. Here is the key one:


Aren’t you afraid that other scientists will scoop your results? The most important implication of open access is the change in the scientific culture. When you have a culture of secrecy, you breed people who trade in secrets. When you have a culture of openness, you must train people in responsible sharing. Our team and the curatorial practices at the University of the Witwatersrand will facilitate collaboration and sharing of datasets, and we expect the field will embrace these open standards.

This is the future of science. The biggest obstacle to progress in many fields is now the need to keep things secret so they can be published in a big journal, and the way forward -- toward better science, more involvement with the public, and a better culture in the scientific community -- is more openness. Plus, it is great to be able to watch the dig unfold instead of having to wait years for the results.

So kudos to National Geographic for supporting this work, and to Lee Berger for deciding to put the future of science above his chance for another big article in Nature.
Posted by John at 12:15 PM

Lee Berger was one of my field school professors!