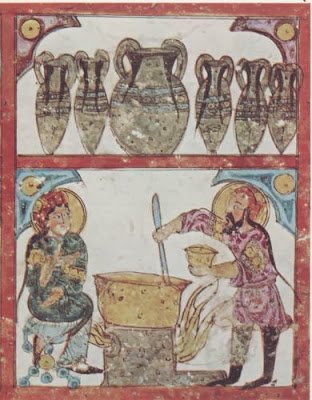 So there's a new book about alchemy, The Secret of Alchemy, by Lawrence M. Principe. For all I know it may be a pretty interesting book, but based on this review in the TLS the whole point is to overturn some sort of established view of the subject. No, he says, alchemy was not just a weird spiritual pursuit, but involved much practical knowledge:


Alchemy’s significance has altered radically in the three centuries since this heyday, Principe argues, after professionalizing Enlightenment scholars rejected the suitability of Decknamen, pseudonyms and dreams of transmutation to a properly rigorous, public science. Denied knowledge of their physical references, Victorian occultists and Jungian psychologists mythologized the arcana of alchemical texts as autonomous allegories, as symbols for occult forces or a psychological manifestation of the collective unconscious. Meanwhile, historians of science dismissed its practitioners as gullible fools. Many recognized that the quest for the Stone involved work at the forge, but alchemists were still frequently portrayed as credulous dupes who begged God’s favour as they wishfully tossed arbitrary heaps of plants and metals into their fires.

For Principe, such flawed interpretations stem from projecting post-Enlightenment meanings of alchemy onto the earlier period and assuming that earlier alchemists’ spiritual declarations wholly governed their coded recipes. Scholars now equipped with revelatory chemical expertise, he insists, will recognize that these reflected a context in which all knowledge was described as a divine gift – a claim strengthened by his lucid deciphering of esoteric images and fascinating replications of experiments purporting to transmute silver into gold, revivify dead bodies, and grow trees of gold.

There is nothing  remarkable or especially bad about these depressing paragraphs. They are absolutely commonplace academic boilerplate, and in their very mundaneness they illustrate one of the most annoying intellectual habits of our age. We are so used to framing every intellectual debate as a new idea battling against an entrenched establishment belief that we can hardly conceive an argument any other way. If an argument is going on, one side must be the rebel bad boys (or girls) and the other the fuddy-duddy old guard.

Actually there is no established belief about alchemy. Interpretation and opinions of it have veered all over the place since the Middle Ages. I have read books arguing that alchemists were proto-scientists and pioneers of chemical knowledge, and others arguing that they were essentially mystics. The argument gets tied up in the same sort of Medieval vs. Renaissance debates that bedevil the study of Galileo's physics, debates about the importance of medieval Islamic science (they were big on alchemy), and so on.

It's great that Principe has used his laboratory knowledge to work out what sort of chemical transformations the alchemists were really doing. I am curious enough that I may track down his book and see what he says. But I have read at least a dozen books on alchemy and have never seen alchemists described as "willfully tossing arbitrary heaps of plants and metals into their fires," and I wish scholars would stop inventing these stupid straw men and just tell us about the past.
Posted by John at 6:38 AM