Why Kings had Fools 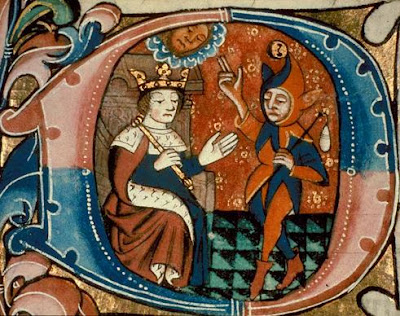 I have always found it puzzling that medieval and Renaissance kings chose as one of their closest companions a man whose job it was to mock them. Here John Southworth tries to explain why:


I have said that the king/fool relationship was advantageous to the kingly patron in that it provided him with recreation and the companionship of a person with whom he could establish rapport at the basic level of one human being to another; but there was always something more to it than that. A medieval bishop is reported to have said on the occasion of his election, ‘I have heard the truth for the last time’. For the more powerful men become, the more isolated they tend to be as their channels of communication with the real world outside the artiﬁcial ambiance of the court are progressively impeded by the desire of their courtiers to please; to tell them what they like to hear rather than what they need to know. The king’s need for truth, especially of the unpalatable kind, and the fool’s ability to communicate it in a uniquely acceptable form as humour was a crucial factor in the relations between them from which the fool derived much of his raison d’étre. . . . 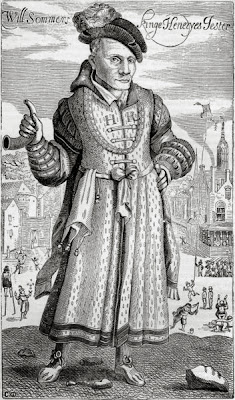 There were, Southworth says, two basic kinds of fools: those who where foolish by nature, who were called innocents, and those who were of normal intelligence and knew they were acting a part:


The innocent speaks the truth because he can do no other. He blurts it out and (more often than not) escapes retribution because of his transparent honesty. It was not so much for his folly as for his ‘wisdom’ - that special gift he possessed for hitting the nail of truth on the head — that the innocent was so greatly valued in the medieval and Tudor periods. As Cardinal Perron said of Master Guillaume, ‘he lives of a Profession he does not understand’. The clever fool understands only too well the risks he is taking in the communication of hard truths, and is obliged to adopt more subtle approaches. He is most effective (and funny) when he contrives to hold a mirror to the king in which his patron can see a magnified image of his own attitudes and decisions, and recognise for himself the folly in them. In the old legend, when Zeus announces in the busy market-place of the world that he will send down a torrent of rain but that only fools will be wetted by it, it is the one wise man there who hurries indoors to fetch an umbrella. When the rain descends and he alone remains dry, the others turn upon him in fury. In a world of fools, it is the person who realises (or who can be brought to realise) his own innate folly who is truly wise. This is the universal message of the clever fool. . . . 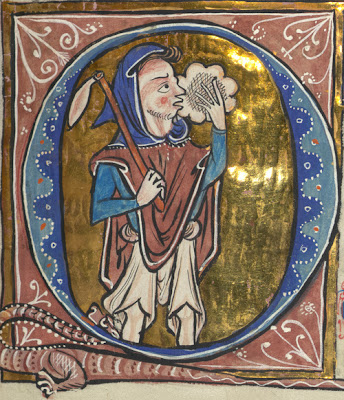 Sometimes it fell on the fool to deliver news that no one else had the nerve to speak:


In a court dominated by fear and hypocrisy (as many were) it might be necessary for truth to be represented as folly in order to be heard. When no one at the French court of Philip VI was brave enough to inform the king that most of his fleet had been destroyed by Edward III at Sluys in 1340, it was left to an unnamed fool to break the news. Entering the royal presence, he was heard to mutter, ‘Those cowardly Englishmen, those chicken-hearted Britons!’ ‘How so?’ Philip asked. ‘Why, because they had not courage enough to jump into the sea like your own sailors, who went headlong from their ships, leaving them to the enemy who did not dare to follow them.’ As Erasmus was to claim of the Renaissance fools of his time, ‘They can speak truth and even open insults, and be heard with positive pleasure; indeed, the words that would cost a wise man his life are surprisingly enjoyable when uttered by a clown. For truth has a genuine power to please if it manages not to give offence, but this is something the gods have granted only to fools.’ 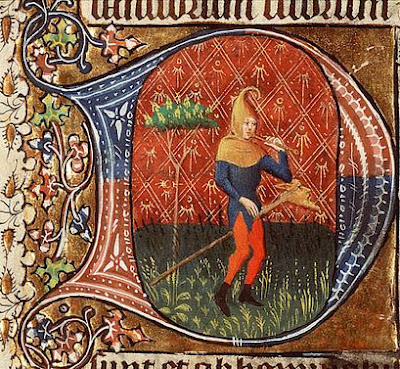 I suppose the point is that while there was something strange and artificial about the relationship between kings and their fools, this might nonetheless be the most normal human relationship in a court where power and obeisance to power rendered all interactions strange beyond anything in my experience.

Quotations from John Southworth, Fools and Jesters at the English Court (Sutton, 1998).
Posted by John at 6:13 AM