How Many Southern Civilians Died in the US Civil War? 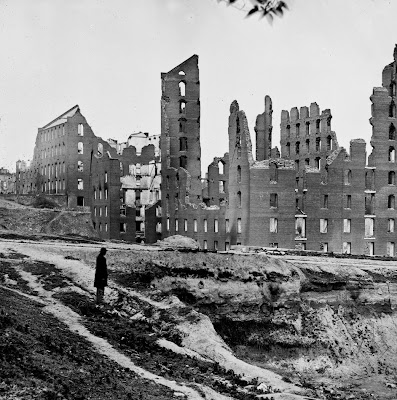 Since I discovered that some Sons of Confederate Veterans types speak of the Civil War as a "genocidal war" and like to denounce the Union for killing southern civilians, I have been wondering how many civilians actually died in the war.

The short answer is that nobody knows, and serious work on the problem seems just to be getting started. A minimum figure would be around 50,000 -- this is the number given by James MacPherson, based on the impressions of contemporary witnesses. Modern statisticians know that such estimates are almost always too low, and that major wars produce "excess deaths" far beyond what people around battlegrounds see and count.

But how to carry out statistical tests? A quick check of the census shows that the population of the southern states grew by 11% between 1860 and 1870. So in that sense there are no "missing" people. Of course the population of the US was growing by leaps and bounds in the nineteenth century, and between 1850 and 1860 the population of the southern states grew by 24%. But lots of things might have depressed population growth: immigration to the South was cut off during the war by the Federal blockade and very low for years afterwards; births fell because so many men were at war or away from home working in factories; many blacks left the south for the north, and many whites headed for the west; economic dislocation, of which there was plenty in the south, usually leads to falling birth rates. So you can't simply compare the growth rates and blame war deaths for the missing 13%. Not only that, but the 1870 census was later attacked as the most unreliable in US history, and it may have missed as many as a million people in the South, 8% of the population. If so, that would make up for much of the shortfall.

In contrast to the number of civilian deaths, the number of military deaths has gotten a lot of statistical attention. In 1866 the government estimated 260,000 dead Union soldiers and 100,000 Confederates. But those estimates slowly rose, and by the end of the 19th century the government was able to count around 620,000 dead men, 360,000 in the North and 260,000 in the South. But that much disputed 1870 census seemed to show far more "missing" men, roughly 500,000 in the North and 350,000 in the South. These higher estimates are getting renewed interest from historians, I suppose because statistical studies of contemporary wars in Iraq and other places have documented so many more war deaths than anyone was able to count. Plus, modern studies seem to show that the 1870 census was not that much worse than any other census -- perhaps a 6.5% undercount, compared to compared to 6.0% in 1850, 5.5% in 1860, and 3.6% in 1880.

I find it interesting that from 1866 on the assumption has been that most of the "missing" men, North and South, were soldiers who were killed in the war or died from the lingering effects of their wounds. Nobody seems to be suggesting that a lot of white male civilians somehow died. But comparing these numbers gives the maximum figure for Southern white male civilian deaths as 90,000, the difference between the 260,000 documented dead soldiers and the missing 350,000 men in the census. Also, all of these calculations include comparisons between the male and female populations which assume that the women are all still there. If anybody had thought that tens of thousands of civilian women had died in the war years, wouldn't somebody have mentioned it? Southerners did a lot of complaining about Northern behavior during the war, but I am not familiar with any accusations of murder on a genocidal scale. Surely there were excess deaths due to hunger and the diseases spread by roving armies, but not so many that contemporary Southerners made this a big part of their bill of Northern perfidy.

Another thing that seems clear is that in the south, blacks suffered more from the war than whites. Many lost or fled from their homes, and whenever there is a food shortage the poorest people suffer the most. Many of the contemporary accounts of civilian deaths specifically focus on southern blacks, and this is part of the reason (not just abolition politics) that northern aid societies and the government launched programs to help freedmen.

It seems to me, going over these numbers, that the number of Southern white civilians who died almost has to be less than 200,000, and that a reasonable estimate might be 50,000 to 100,000, well under one percent of the population. Which qualifies as a tragedy but hardly as a genocide.
Posted by John at 7:57 AM

Perhaps it is my ethnictiy, but I think it's simply true that there was no genocide of the southern people, because genocide doesn't mean "killing a lot of civilians" or "oppressing someone." It means intentionally attempting to physically eliminate an ethnic group. There have been plenty of these attempts in history, and many of them have succeeded. But the Civil War even at its cruelest in no sense comes close.

Absolutely, in a definitional sense there was no genocide, because nobody in the North wanted to exterminate Southern whites. As I said, the genocide talk just made me wonder about the actual numbers.

I also have the feeling that SCV types would find talk about the definition of genocide to be a quibbling distraction, so in the context of this argument the fact that the number was not that big probably counts for more than the motivations.

There were plenty in the North who wanted to exterminate the Southern people.

Take, for instance, this piece in the Daily Herald newspaper in Newburyport, Massachusetts, on May 24, 1861: "...if it were necessary, we could clear off the thousand millions of square miles so that not a city or cultivated field would remain; we could exterminate nine millions of white people and re-settle – re-people the lands. There is no want of ability; and if such a work is demanded, there would be no want of a will."

And General Sherman repeatedly expressed a desire to exterminate Southerners:

"There is a class of people [Southerners] men, women and children, who must be killed or banished before you can hope for peace and order."

"The Government of the United States has ... any and all rights which they choose to enforce in war -- to take their lives, their homes, their lands, their everything.....war is simply power unrestrained by constitution....To the persistent secessionist, why, death is mercy, and the quicker he or she is disposed of the better....."

Throwaway lines about killing all of this group or that are common as dishwater, especially in wartime. Lately I have heard half a dozen people say out loud that everybody on Wall Street should be shot. That is not genocide and really has nothing to do with genocide.

Genocide requires careful planning and large-scale execution; it requires figuring out how to kill tens of thousands of people and then following through. There was nothing like that during or after the American Civil War.

Sir: This was an invasion of the south by an aggressive north whose goal was empire.There is no other word for it. The Lincoln admin. violated every clause of the constitution of 1787 in this invasion and thus subjugated a people who had controlled their own states by self-determination based on this original constitution. The north made total war on women and children while most of the south's men were away in the army. There are numerous well documented accounts of northern armies shelling cities for no military goal, and putting to the torch vast areas of property.The north employed the same war crimes methods on native Americans.And, then the fallacy of the freeing the slaves as the cause as a rationalization. Well, the north was just as racist as the south based on the treatment of native Americans, and the writings of Lincoln himself show him to be a white supremacist who wanted to deport Africans back to Africa. Freeing the slaves only in the south was political expediency to prevent foreign recognition of the south and to isolate the south.

Well I don't use or trust anyone but the Library of Congress; the National Archives or the National Park Service as if a Southerners states something it is a lie you know like who burnt Columbia? But reading the Official records there were many cases of forced relocation (Rosewell Mill), rape and it is almost certain many women were killed to prevent them from reporting the crime, and being desperate forced migration.

George Andrews has no clue what he is talking about. Lincoln didn't violate every clause of the Constitution. Utter nonsense. Not to mention, it was the South who seceded and fired the first shots of the war. Folks like Andrew have an agenda to push. The North did not make war on women and children. And whenever "war crimes" are mentioned against the Indians, it takes no reminder that the South was a part of the U.S. all the war up to and after the war-they contributed handily to the "massacre" of the Indians-remember, it was the Southern states who pushed for the "Trail of Tears" and a Southern president (Andrew Jackson) used Federal troops to enforce it. Then there is the fact that Confederate troops likewise did the same things-Texas was one of the places where the U.S. army was to be found before the war, fighting Indians. During the war, that continued with Confederate troops. Andrew flat lies about Lincoln and him wanting to ship folks back to Africa. Nowhere did Lincoln say as much. He was for voluntary colonization, not forced. The Lost Cause is strong. Southron_98 also makes claims that he cannot back up. Both sides had a hand in Columbia-the Confederate troops set fire to the cotton, high winds caused the fire to get out of hand, and Sherman ordered the fires put out.....some of his troops didn't help and actually participated in helping to spread it.

Both of these folks forget about the attacks on Southern civilians by Confederate authorities. Unionists, deserters, and folks who wanted nothing to do with the war were attacked. Every Southern state contributed at least a battalion or more of white troops to the Union cause-except South Carolina, though they and many others had blacks fighting for the Union as well. Places like East Tennessee, Northern Georgia and Alabama, Western North Carolina, much of Arkansas, West Virginia, etc., had strong holdouts for the Union. The Confederacy committed atrocities against these civilians. Look up Shelton Laurel for an example of this. Then there was the Confederate cavalry under Wheeler. They pillaged and attacked civilians. Finally, there were the deserters. Jefferson Davis, in a speech in late September 1864, admitted that two-thirds of the army was "absent without leave". Southern civilians died on a large scale, but as the folks at the beginning said, it was not targeted and the CSA did it a lot to their own people.

The Baltimore and Ohio Train Museum on West Pratt Street in Baltimore, Md., lists a total of 1.3 million deaths during the Civil War, and tabulates the deaths by week. Since the primary theater for the war was The South, that means between 600,000 and 700,000 deaths occurred largely in The South, apparently in the civilian population. Again, the tabulations, presented in a video, appear to be carefully calculated, week by week and month by month. Is it possible that civilian casualties were that high?

If the numbers were indeed that high, it suggests a campaign that deliberately or unintentionally caused a large loss of life in the civilian population of The South.