Researchers investigating the sediment piled up behind a mill dam on Pennsylvania's Little Connestoga Creek found a deposit of "fossil" leaves laid down more than 300 years ago, before European agriculture and building water mills transformed riverside forests. The main species were red oak, beech, sweet birch and chestnut. Except for chestnut, largely extinct in America due to chestnut blight, the other trees are still  found in Pennsylvania's forests, but they are outnumbered by other species.

By 1850 there were 65,000 water powered mills in eastern North America, and they had a profound impact on streams. Before they were built, many creeks and small rivers were "braided streams" that wandered back and forth across broad, gravelly bottoms, with numerous sandbars and short-lived islands. When the hills were plowed and the streams dammed, vast quantities of soil washed into the streams and then piled up behind the dams, forming the flat, broad floodplains we see today. 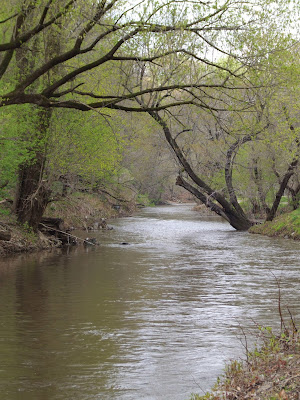 Completely different communities of trees and other plants grew on the transformed stream banks. Now there is great interest in returning streams to their natural, pre-mill dam state. There are two problems with this: first, there is all that sediment to deal with, and sometimes when dams are knocked down it all washes quickly downstream, leading to big silt problems in the Chesapeake Bay and other estuaries. Second, we don't really know what what the ecosystem of those old streams was like -- which is why all the interest in this deposit of preserved leaves.
Posted by John at 9:31 AM