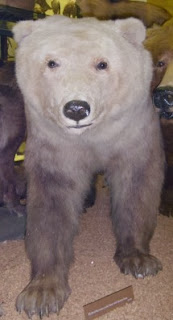 Sometimes polar bears and brown bears (grizzlies) mate, producing offspring called pizzly bears or grolar bears. One shot in northern Canada in 2006 was described as having


thick, creamy white fur, typical of polar bears, as well as long claws; a humped back; a shallow face; and brown patches around its eyes, nose, and back, and having patches on one foot, which are all traits of grizzly bears.

A wild bear has also been shot that had grizzly bear for a father and a grizzly-polar bear hybrid for a mother, so at least some of these hybrid bears are fertile.
Posted by John at 6:46 AM