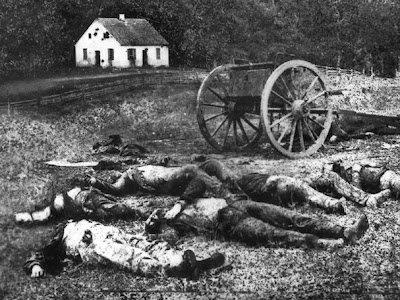 Some people are pretty seriously invested in stuff that happened 150 years ago. Andy Hall of Dead Confederates calls to our attention this post, written by an officer in the Sons of Confederate Veterans about a plan to put a monument on the Olustee Battlefield in Florida honoring the Union soldiers who died there:


VICKSBURG AND THE SCV: RETHINKING USA MONUMENTS TO THE U.S. GENOCIDAL WAR ~ EVERY U.S. MONUMENT to the U.S. Soldiers who fought the Southern States and people is a maniacal celebration of anti-Southern race-hatred and should be removed from every Southern State. These people want us to think that the men who killed our families to keep us in “their” subjugation are heroes of the USA and the Southern people. This is absurd. I call it stinkin’ thinkin’.

Only a pathological or psychopathic bully would approve and celebrate the killing of a persons family and then erect a monument to the genocidal violence committed on the property of the same people they violated. This is like building a monument in Nagasaki and Hiroshima celebrating President Truman and the crew of the plane that bombed these cities.

Our Stockholm Syndrome has kept many from “seeing” things like this in the past, but it is time to wake-up and from the shackles of the merchants of death. . . . Help this message go viral to every Southerner.

A few years ago I visited Vicksburg Battlefield after someone had damaged dozens of Illinois monuments. It looked like they had shot the monuments with buck shot and then beaten on the monuments thousands of times with a sledge hammer. The huge Greek-godlike monument to Lincoln smelled like urine and there was feces on some of the smaller Illinois monuments. Most of these monuments were just unveiled. To think that the people of Illinois today would build new monuments to the men who did what was done in the Siege of Vicksburg is a symptom of a psychotic society in Illinois and the USA. . . .

Sadly, the National Sons of Confederate Veterans repeatedly, decade after decade, refer to the invaders of the South as “honourable men who fought bravely for their country.” There is NO HONOUR to any man who fights for a totalitarian dishonourable cause! Anyone who thinks these men were honourable to invaded the Southern States has a mind that is totally uninformed by the Holy Bible and the Will of God. The best that can be said of a person who would honour the USA invaders is that he is a spiritual inebriate. . . .

Those who will honour U.S. Veterans now living need to know that they are honouring men and women who are doing to foreign nations what the USA did to the South during the 1860s through the Period of Reconstruction in the 1870s. We must at least stop celebrating the American Holocaust committed against the Southern people of the Confederate States of America ! ! !​

According to Hall, rhetoric like this is commonplace in SCV circles. I am struck by the peculiar mixing of Christianity with Confederate revivalism, which has become one of the main themes of Lost Cause holdouts. To them the Confederates were defending a godly commonwealth against secular attack, which I think is about the strangest possible interpretation of the war over slavery.

So if you ever wondered why the issue of Confederate flags keeps coming up, here's your answer: some Southerners are still fighting the war in their hearts.
Posted by John at 8:15 AM