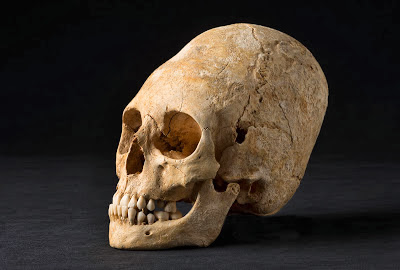 The skull above was excavated from a fifth century CE cemetery at Obernai, France, in the Bas Rhin province. This sort of deformation was achieved by binding babies' heads to cradle boards. 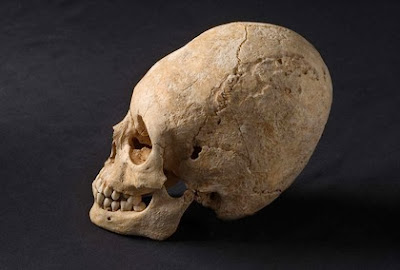 This was practiced by many central Asian nomads, including the Huns and Sarmatians. According to this little article on the Obernai excavation, it was fairly common among the Frankish elite of Merovingian Gaul. To me that says something rather profound about the values of those barbarian invaders, who at that time were asserting their status by copying central Asian nomads rather than assimilating to Rome. 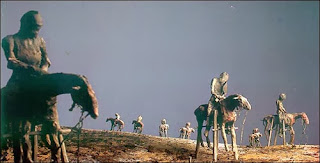 The famous tomb of Childeric, Clovis' father, says the same thing; he was buried in a huge tumulus around which the bodies of at least 30 horses were buried in three pits. The mass sacrifice of horses at the death of a king had been described by Herodotus, so it was an ancient part of steppes nomad culture -- just like cradleboarding. The Frankish elite was proud of not being Roman. Indeed the name they used for themselves, the "free people," must imply that they were the ones who did not bend their knees to Rome. They reinforced their independence by copying styles of jewelry and clothing, funeral rituals, and other things from the Gothic tribes and other even more exotic barbarians.
Posted by John at 7:24 PM