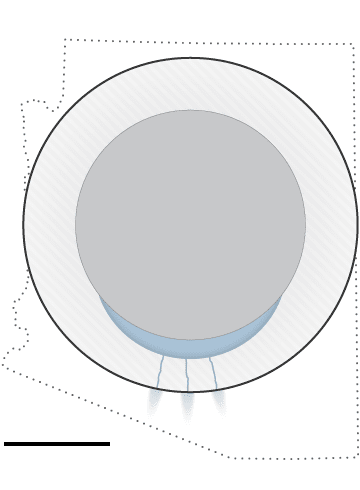 This is a fabulous technological trick:


Cassini has no instruments that can directly detect water beneath the surface, but three flybys in the years 2010-12 were devoted to producing a map of the gravity field, noting where the pull was stronger or weaker. During the flybys, lasting just a few minutes, radio telescopes that are part of NASA’s Deep Space Network broadcast a signal to the spacecraft, which echoed it back to Earth. As the pull of Enceladus’ gravity sped and then slowed the spacecraft, the frequency of the radio signal shifted, just as the pitch of a train whistle rises and falls as it passes by a listener.

Using atomic clocks on Earth, the scientists measured the radio frequency with enough precision that they could discern changes in the velocity of Cassini, hundreds of millions of miles away, as minuscule as 14 inches an hour.

And the measurements show a large dense mass in the south polar region, just right for a body of water bigger than Lake Superior. Graphic from the Times, which for some reason compares Enceladus to Arizona.
Posted by John at 7:40 PM