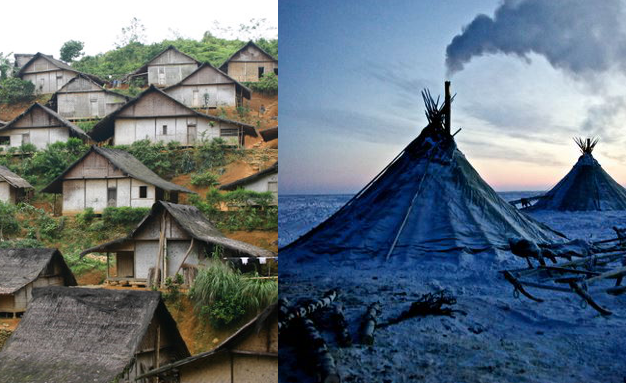 Why are some societies individualistic while others are strongly collectivist? Why do some peoples tolerate great restrictions on their behavior, for the good of all, while others shout loudly about their "rights"?

There is a new theory about this question: germs. Evolutionary biologists Randy Thornhill and Corey Fincher think that much of the difference between different human societies can be explained by differences in the degree of threat from bacteria, viruses, and other pathogens:


The threat of disease is not uniform around the world. In general, higher, colder, and drier regions have fewer infectious diseases than warmer, wetter climates. To survive, people in this latter sort of terrain must withstand a higher degree of “pathogen stress.” Thornhill and his colleagues theorize that, over time, the pathogen stress endemic to a place tends to steer a culture in distinct ways. Research has long shown that people in tropical climates with high pathogen loads, for example, are more likely to develop a taste for spicy food, because certain compounds in these foods have antimicrobial properties. They are also prone to value physical attractiveness—a signal of health and “immunocompetence,” according to evolutionary theorists—more highly in mates than people living in cooler latitudes do. But the implications don’t stop there. According to the “pathogen stress theory of values,” the evolutionary case that Thornhill and his colleagues have put forward, our behavioral immune systems—our group responses to local disease threats—play a decisive role in shaping our various political systems, religions, and shared moral views.

If they are right, Thornhill and his colleagues may be on their way to unlocking some of the most stubborn mysteries of human behavior. Their theory may help explain why authoritarian governments tend to persist in certain latitudes while democracies rise in others; why some cultures are xenophobic and others are relatively open to strangers; why certain peoples value equality and individuality while others prize hierarchical structures and strict adherence to tradition. What’s more, their work may offer a clear insight into how societies change. According to Thornhill’s findings, striking at the root of infectious disease threats is by far the most effective form of social engineering available to any would-be reformer.

By the time the two published a major paper in Behavioral and Brain Sciences in 2012, they had marshaled evidence that severe pathogen stress leads to high levels of civil and ethnic warfare, increased rates of homicide and child maltreatment, patriarchal family structures, and social restrictions regarding women’s sexual behavior. Moreover, these pathogen-avoidant collectivist tendencies, they wrote, coalesce over time into repressive and autocratic governmental systems. Want to understand the rise of fascism, dictatorship, and ethnocentric campaigns that dehumanize outsiders? Look to the prevalence of pathogen threats. Over the years, scholars like William H. McNeill and Jared Diamond have argued that germs and geography exert an under-appreciated influence on the rise and fall of societies. But for Thornhill and Fincher, human psychological adaptations to the threat of disease are nothing less than the missing link in our understanding of culture—a fundamental key to our collective values that researchers and philosophers over human history have overlooked.

Oh, please. I have a theory about why societies in warm, wet locales are different from those in high, dry, cold ones, and I can put it in two words: population density. The more dense the population, the greater the acceptance of restrictive rules for the common good. I would be willing to bet that my two-word theory covers more cases than Thornhill and Fincher's. For one thing it explains the politics of contemporary America, where cities vote Democratic and deserts are safely Republican, a difference that has nothing at all to do with disease.

It bewilders me that anyone would bother to look at this issue without considering economics. One of the oldest ideas in archaeology, and still one of the best, is that river valley societies dependent on irrigation will develop authoritarian, bureaucratic governments. Of course these same places are more threatened by disease than the abodes of mountaintop sheep grazers, but which is the primary cause here?

And while I'm complaining, there is none, as in zero, evidence that attractive people are more "immunocompetent" than ugly people, nor is it clear how much attractiveness matters to reproduction in the sort of peasant society where everyone has an arranged marriage.

No doubt the threat of infectious disease explains some things about human society -- after all, it was our biggest killer from the Neolithic until about a century ago. But it does not explain everything, and I think both warfare and food production explain a lot more.
Posted by John at 7:10 AM