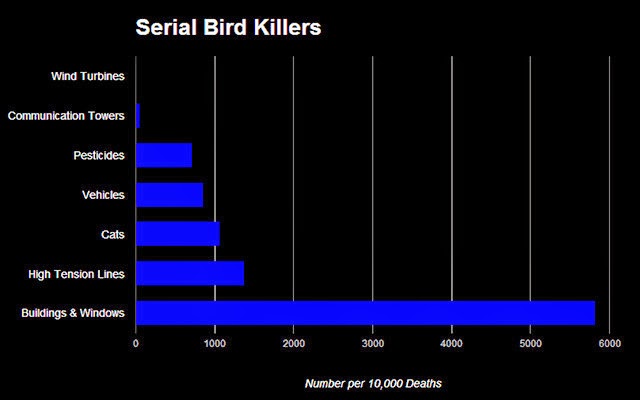 The perception has put down roots among bird-loving people that wind turbines kill birds. Reaction over twitter to the announcement of a new wind-power facility is likely to be, "How many bats and birds will they slaughter this year?" This sort of thinking has consequences, too. The U.S. Interior Department has taken a go-slow approach to wind turbines for decades, largely because of fears about birds. And this:


An expansion of the world's largest offshore wind farm was recently scrapped after the U.K. would have required a three-year bird study.

But it is far from certain that wind turbines really have much impact on bird populations. The latest major study on the impact in the US offered a range of 20,000 to 573,000 birds per year, which might be the widest margin of error I've ever seen in a published study. But by way of comparison, more than a million birds are killed every year by tall buildings in Toronto, Canada alone; the total impact of skyscrapers across North America is in the billions. The chart above presents data from the U.S. Forest Service showing that while wind turbines kill birds, but they don't even compare to cats or high-tension power lines, let alone buildings with glass windows. Birds are also more susceptible than mammals to air pollution and so suffer a disparate impact from coal or oil fired power plants. The ever vigilant Royal Society for the Protection of Birds offers this as their conclusion:


If wind farms are located away from major migration routes and important feeding, breeding and roosting areas of those bird species known or suspected to be at risk, it is likely that they will have minimal impacts.