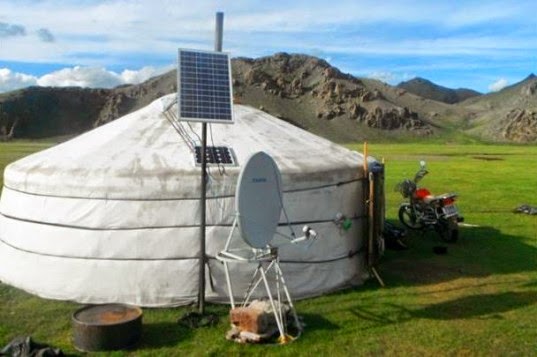 If there's one thing that unites populists of the left and the right, it's hatred of power companies. So the politics of rooftop solar panels, beloved by libertarians and hated by utilities, have created some strange bedfellows lately. Just this month a Tea Party-affiliated group known as TUSK has been able to reverse a win by the grid owner in Oklahoma that forced solar panel owners to pay a fee for attaching to the grid:


“Monopoly utilities want to extinguish the independent rooftop solar market in America to protect their socialist control of how we get our electricity,” blasts the website of Tell Utilities Solar Won’t Be Killed, known as TUSK for short. That’s not the type of rhetoric you expect conservatives to fire at the power industry. Then again, this isn’t your typical renewable energy advocacy group. While it works closely with some of the nation’s largest solar panel providers, TUSK is publicly led by Barry Goldwater Jr., the former Republican California congressman and the son of the GOP icon. . . .

TUSK and its conservative allies have repeatedly found success placing those utility-backed proposals within a free-market frame that speaks directly to conservatives. User fees are just another name for a new tax, argues Goldwater and his outfit; a change to the sale price is just another attempt by the government to limit individual choice, they say.

I find this very cheering. Utilities are one of the businesses that hate competition the most, and they see rooftop solar panels as a profound competitive threat. If the government doesn't force them to accommodate people who install their own panels (or windmills or fuel cells), they will find ways to destroy home-based power. And home-based power has certain great advantages when it comes to making renewable energy competitive: people donate their own land, the permitting process is much simpler, some people donate much of the labor, and various libertarians, grouchy populists, doomsday preppers, and others want to be energy independent badly enough that they will even pay a little more for power they control themselves. So let's hear it for TUSK and their nutcase allies, who are fighting for the planet even if they don't want to admit it.
Posted by John at 7:34 AM