Memorial Runes from the Viking Age 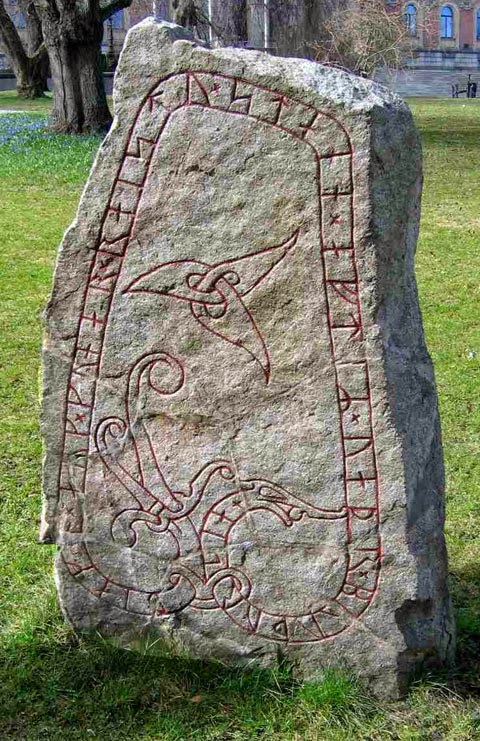 Most of our sources on the Vikings were either written by their enemies or else by their descendants, centuries later. One source we have for the world view of Vikings in their heroic age is the runic inscriptions on gravestones and other objects. About 3000 rune stones survive in part, 2700 of them in Sweden. Many record the deeds of voyagers, and they seem infused with a spirit of restlessness. This verse is one of the most famous:


Alríkr, Sigríðr's son,
raised this stone
in memory of
his father Spjót,
who had been
in the west,
broken down
walls and fought in townships.
He knew all
the journey's fortresses.

Transcriptions and translations of several dozen runestones are now on various pages at wikipedia. These are typical:


Ólafr raised this stone in memory of Sylfa, his son. He died in the west.

Guðbjôrn (and) Oddi, they raised this stone in memory of Guðmarr, their father. He who died stood valiantly in the staff of the ship; (now) he lies buried in the west.

Véketill and Ôzurr had this stone raised in memory of Eysteinn, ... good father. He perished abroad with all the seamen. May God help (his) spirit.

Tóla placed this stone in memory of Geirr, her son, a very good valiant man. He died on a Viking raid on the western route.

This Swede traveled to the west before he joined the great expedition of Ingvar the Far-Traveled:


He had long been in the west; died in the east with Ingvarr. 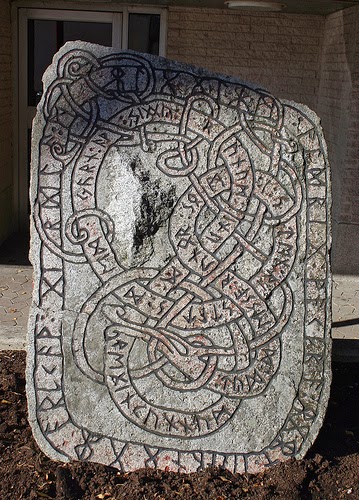 This man's name is lost, but we know that


He died in Battle, east in Russia
Leader of the guard, the best of landsmen.


Tóki and his brothers raised this stone in memory of their brothers. One died in the west, another in the east.

This Danish stone reminds us that the Vikings fought each other as much as anyone else:


Asrathr and Hildung/Hildvig/Hildulf erected this stone after Fretha, their kinsman, ... he died in Sweden and was first .... of every viking.

Two for members of the Varangian Guard, mercenaries who served the emperor in Byzantium:

Ástríðr had these stones raised in memory of Eysteinn, her husbandman, who attacked Jerusalem and met his end in Greece.

This man got his share of the Danegeld the English paid to buy off Viking attackers:


Danr and Húskarl and Sveinn had the stone erected in memory of Ulfríkr, their father's father. He had taken two payments in England.

Even trading as very dangerous:


. . . drowned near Novgorod when his cargo-ship went down: only three escaped with their lives.

And one final message from the Viking age, this one scratched on a silver neck ring: