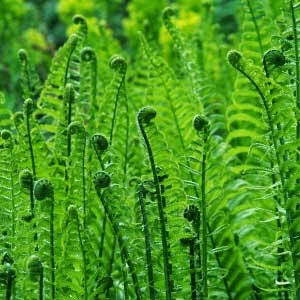 Ferns got a jump start by stealing genes from other plants:


The scientists found that roughly 100 million years ago, ferns exploded into a number of new lineages. Eighty percent of today’s fern species can be traced to that evolutionary burst.

Intriguingly, these successful ferns also evolved a new kind of light-sensing protein. Known as a neochrome, it makes ferns sensitive to dim levels of light. These neochromes may have enabled ferns to thrive on shady forest floors.

In 2011, one of Dr. Pryer’s graduate students, Fay-Wei Li, set out to discover the origin of neochromes. It was possible, he speculated, that an older light sensor that was sensitive to brighter light became adapted to dim forest shade.

But Li could not find any precursor for the neochrome gene in any species of fern; all their neochrome genes were pretty much the same. Frustrated, he turned to a new database of plant DNA. There he found what he was looking for, a neochrome gene with the sort of variability one expects closer to the evolutionary root of anything new. It was not in ferns, though, but in a distantly related group of plants called hornworts:


Comparing all the data, Mr. Li and his colleagues came up with an unexpected hypothesis for how ferns got their neochromes. Neochromes did not gradually evolve in ancient ferns. Instead, a single lineage of ferns picked up the neochrome gene from hornworts about 180 million years ago.

This discovery is another triumph for the now deceased Lynn Margulis, who always argued that the key stages of evolution happened more by the sharing of genes than by Darwinian natural selection. It is also a reminder of the risks involved in inserting genes for things like herbicide resistance or insecticides into crop plants, since there is a small but real chance that those genes will jump to weed species.
Posted by John at 7:35 AM