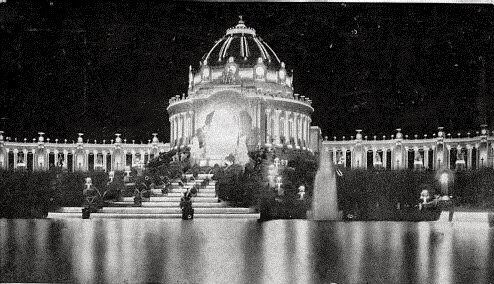 The 1904 World’s Fair was a celebration of American expansion. It as officially called the Louisiana Purchase Exhibition, although like the Chicago Fair it actually opened a year late for the centennial of the 1803 event it was supposed to celebrate. It was saturated with references to the frontier and to American exceptionalism, and among other things it was, at 1200 acres (4.9 km²), by far the biggest great exhibition yet celebrated. The fair's official brochure proclaimed:


The heroes of Homer’s Iliad were engaged in petty achievements when compared with the work of the men who wrestled a vast wilderness from savages and wild beasts and made it the seat of twenty great commonwealths in a single century. 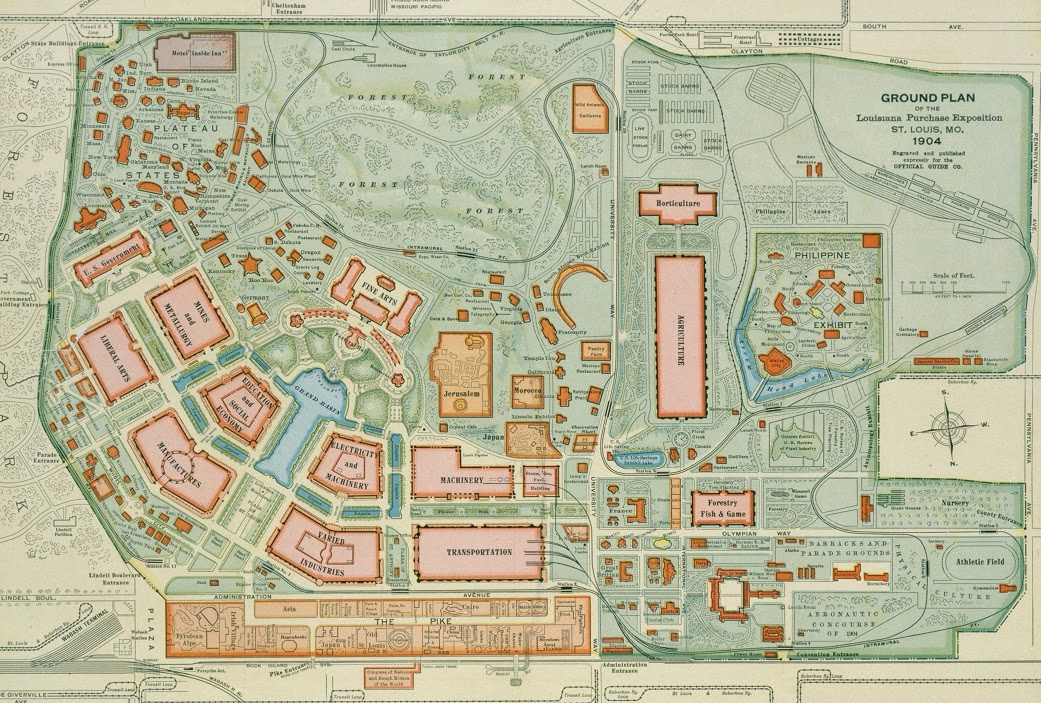 The fair was staged on what had been the Forest Park, and there were even some protests against the clearing of these woodlands. But in America in 1904, you were wasting your breath to complain about the clearing of forests for progress, so of course the trees were cut and the show went on. 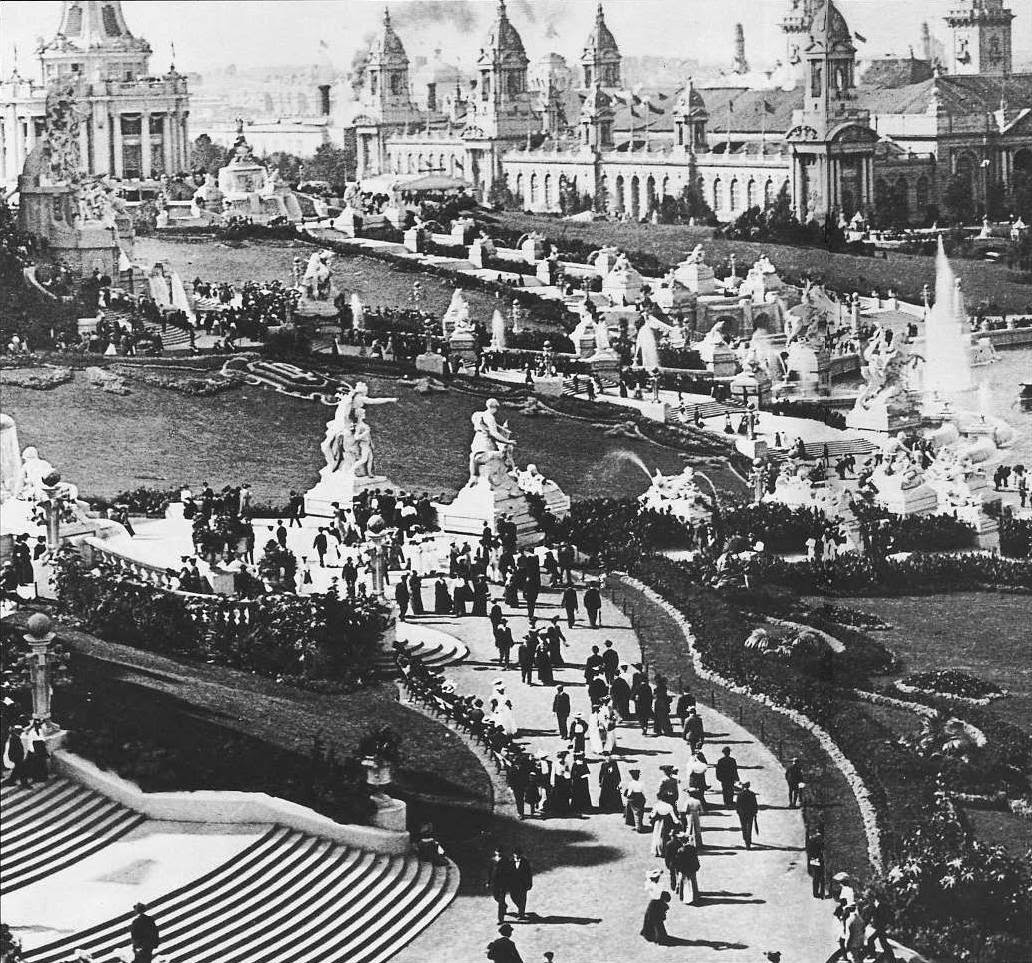 The landscape was designed by George Kessler. 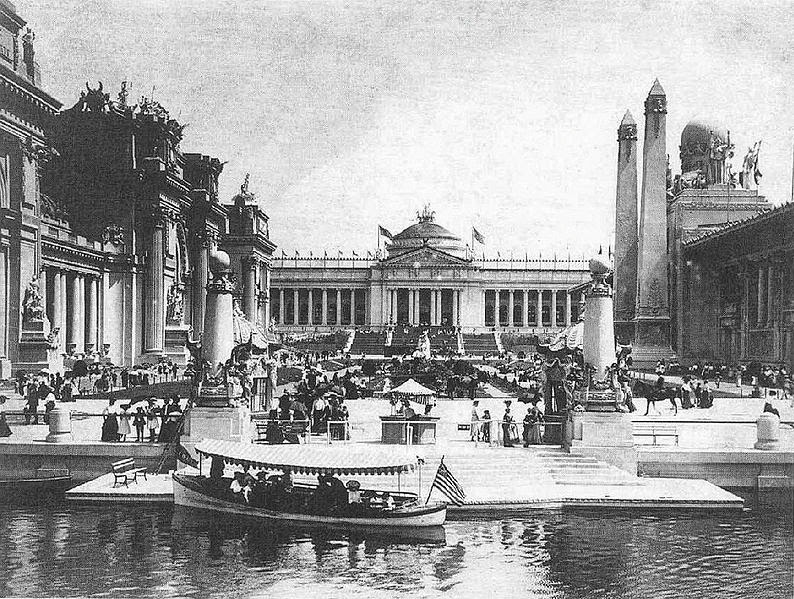 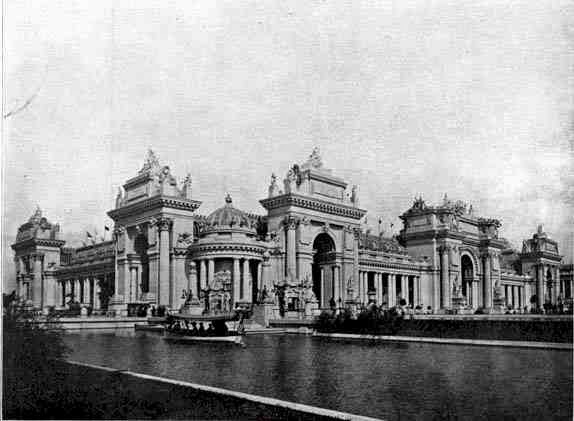 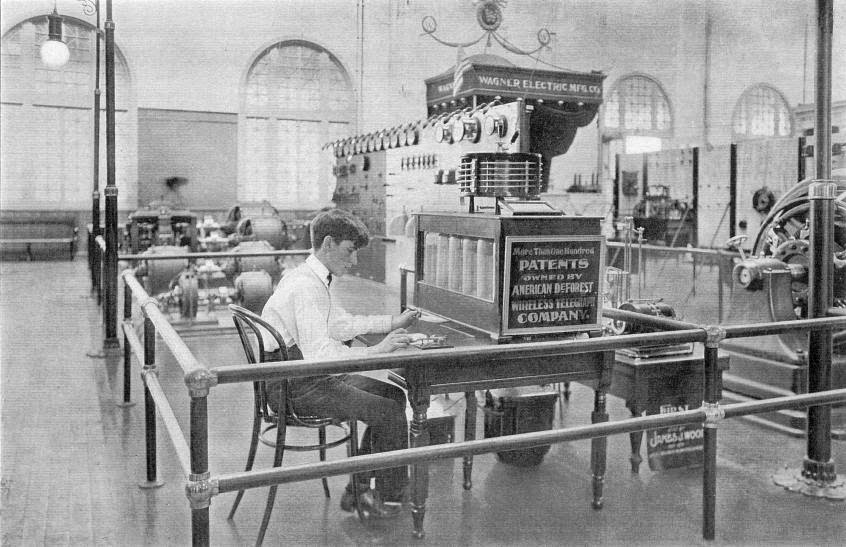 Electricity dominated the technical wonders. The newest hot technology was wireless, and a radio tower allowed visitors to send messages to Chicago via wireless telegraphy. 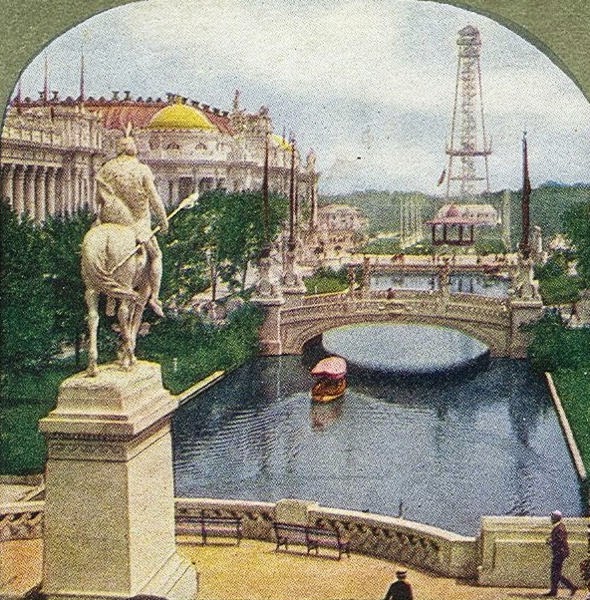 One of the lagoons, with the wireless tower in the background. The sort of people who post World's Fair pictures on the internet seem fascinated by these early color photos, so much that it is hard to find the sort of magnificently clear black and white images I found by the hundreds for the Chicago World's Fair. 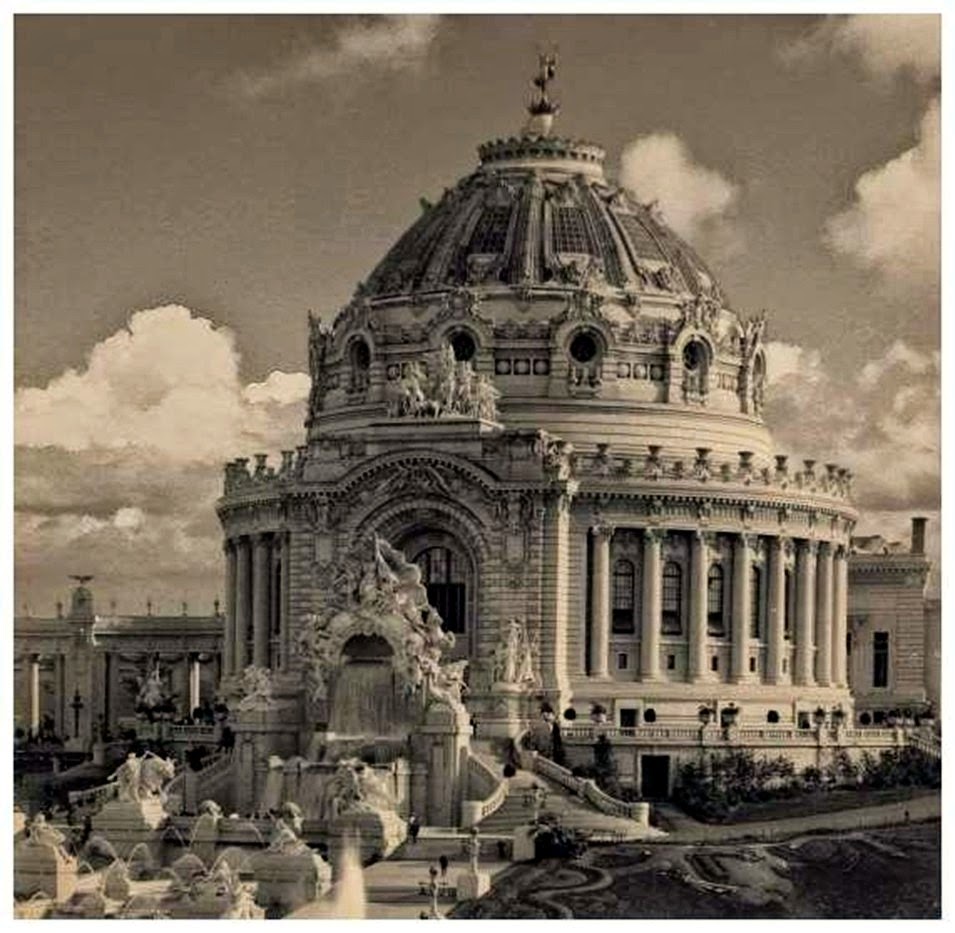 But I did find this one, of the Festival Hall, which featured the world's biggest organ. 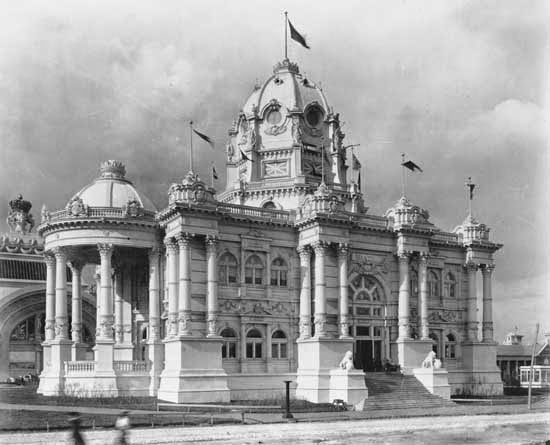 And this one of the Brazilian pavilion. 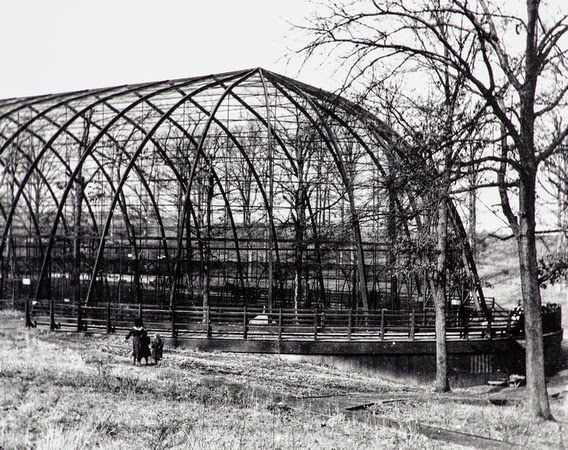 At these fairs they always wanted to break a sheaf of records for the biggest of all sorts of things; this was the world's biggest aviary. 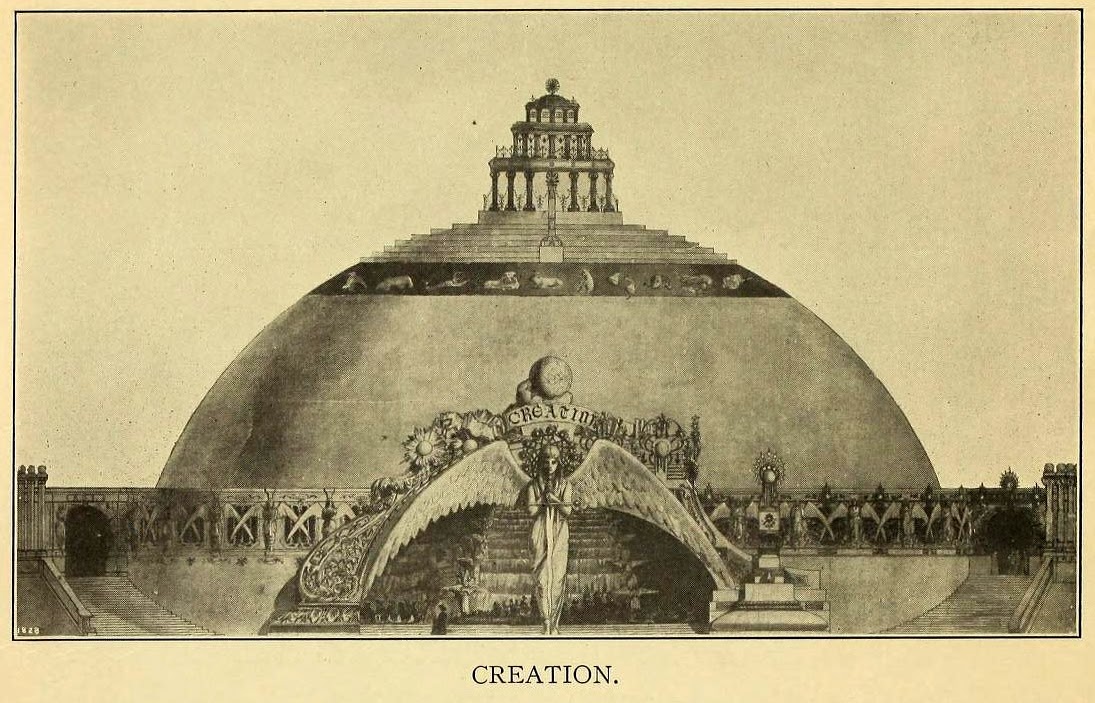 The entertainment district was called The Pike, and it featured the usual assortment of nineteenth-century fun:


Considered the carnival side of the Fair, Pike visitors could enjoy fifty different amusements, including contortionists, reenactments of the Boer War, babies in incubators, the Dancing Girls of Madrid, Jim Key the Educated Horse, and Hagenbeck’s Zoological Paradise and Animal Circus—which featured an elephant water slide.

Above is the design for the Creation Pavilion, which looks grand and sinister, but since it as on the Pike, I have to wonder. 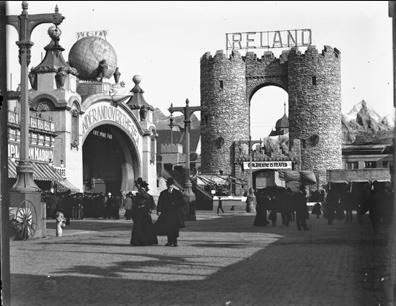 I find it amusing that the Pike included an Irish village. I suppose instead of starving people got drunk while dreaming of the Old Country. 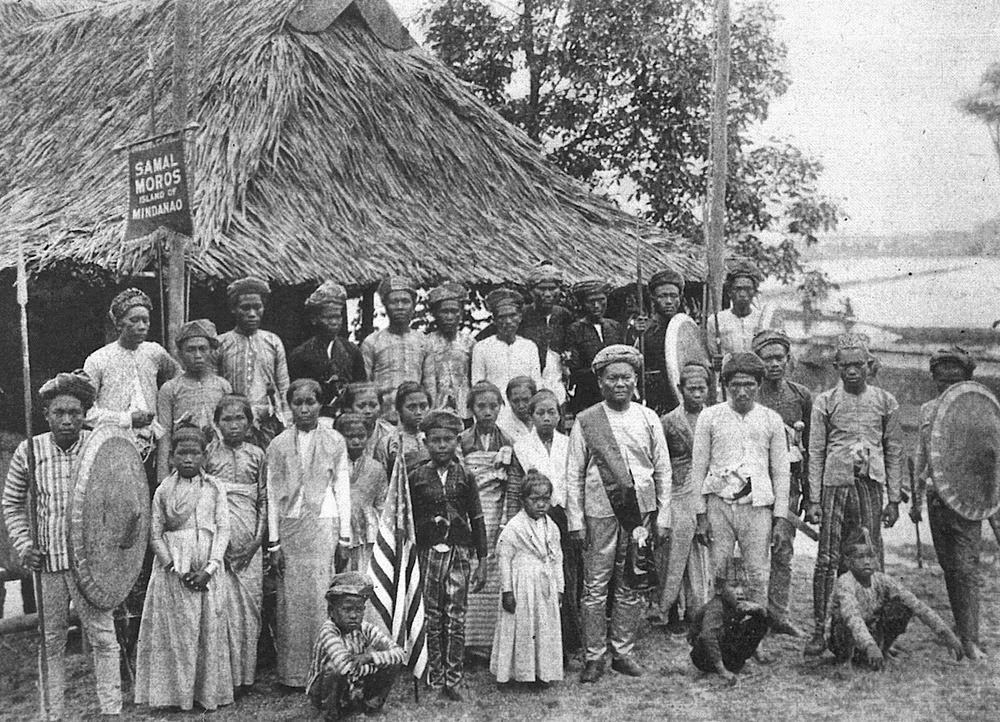 The most controversial part of the fair, then and now, was the Philippines exhibit. The US had acquired the Philippines just five years before, and Congress voted the then princely sum of $1.5 million to stage an exhibit introducing Americans to their new friends. More than a thousand Filipinos from ten different ethnic groups were brought over for the fair and housed in a 47-acre compound that included several distinct villages. They were drawn from groups of fairly primitive farmers, the better to display quaint, savage customs. There was also a troop of Filipino soldiers who drilled and saluted the American flag to show their new patriotism.

Among the people offended by this show were the Filipino elite, the sort of people whose families had been speaking Spanish for 300 years, and from their haciendas in Manila they fired off angry letters to the governor, the President, the Secretary of the Interior, the Governor of Missouri, and the officials of the fair. The governor fired back, saying that the tribesmen were just as Filipino as the people of Manila and maybe the Manila elite should pay more attention to their fellow citizens instead of pretending that they represented everyone in the islands. 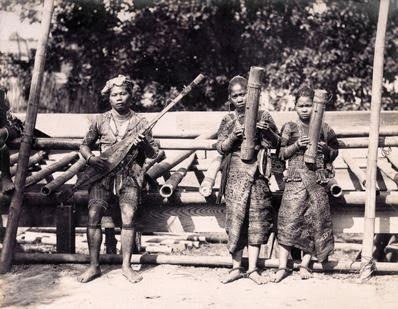 But plenty of Americans were just was offended, in their case by the display of people in what amounted to a zoo, which, they said, was the perfect expression of the sort of dehumanizing militaristic imperialism on display in the Spanish-American War. 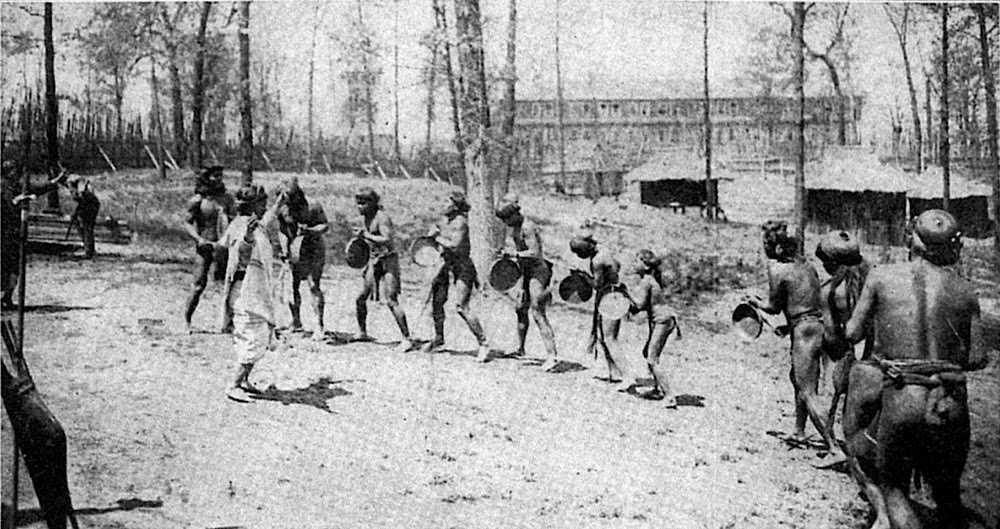 The show went on, though, and the exhibits were fairly popular. It is harder to find out how the various Filipino natives felt about the experience, although Filipino Americans have tried. Ambivalent, seems to be the answer; some complained about being used and not paid all the money they were promised, others were pleased to see something of the world at government expense. Some were fascinated by the notion of electing the President, so a voting booth was set up for them -- although their votes weren't part of the official count. 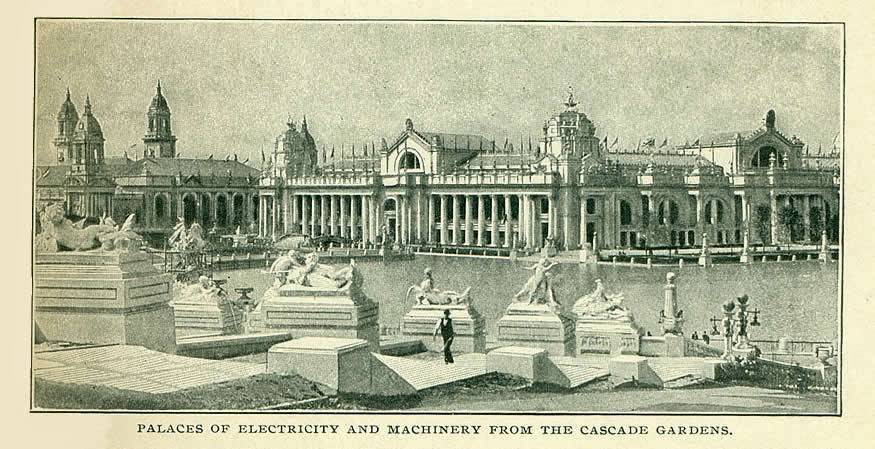 On a lighter note, the fair has a big place in American popular culture. The ice cream cone is supposed to have been invented there, and Dr. Pepper was introduced to the nation. The hamburger was certainly not invented there, but some people do say it got a huge boost as the quintessential American food. And, yes, Meet Me in St. Louis was written for the fair. All in all, quite a happening.
Posted by John at 6:56 AM