Is that Monkey Mourning, or Just Confused? 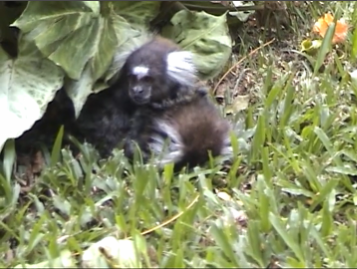 
The two marmosets—small, New World monkeys—had been a closely bonded couple for more than 3 years. Then, one fateful day, the female had a terrible accident. She fell out of a tree and hit her head on a ceramic vase that happened to be underneath on the forest floor. Her partner left two of their infants alone in the tree and jumped down to apparently comfort her, until she died an agonizing death a couple of hours later.

Biologist Bruna Bezerra calls this "caretaking of his dying partner" and "mourning" and says it is the first clear evidence of mourning behavior in wild primates other than chimps. But then she adds:


that some of his behaviors—such as emitting alarm calls and trying to mate with her—might have been signs of stress rather than compassion.

If you're trying to have sex with a dying mate, does that count as compassionate mourning?
Posted by John at 11:33 AM