Museum for the Memory of Ustica 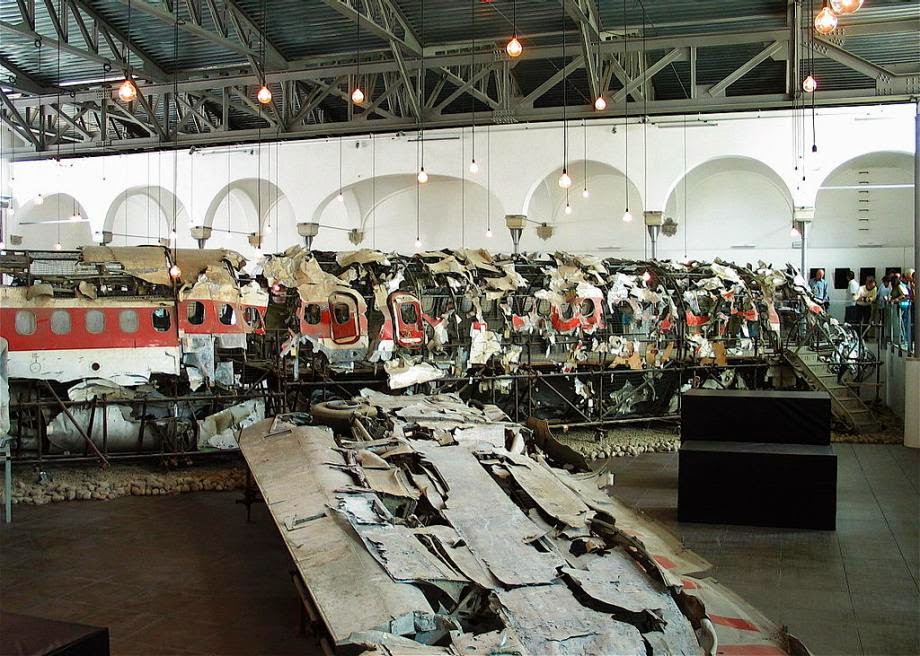 On June 27, 1980, an Aerolinee Itavia DC-9 took off from Bologna in Italy, headed for Palermo in Sicily with 81 people on board. fifty-one minutes later it disappeared from radar screens. A few hours later, wreckage from the plane was spotted in the Tyrrhenian Sea near the island of Ustica.

The investigators figured out fairly quickly that the plane had blown up in midair. But why? The government initially blamed a bomb placed by Red Brigades terrorists. As always in Italy there were plenty of conspiracy theories, which got a big push during the famous "maxi trials" of mafiosi, when two Sicilian hit men claimed to have shot down the plane on the orders of former premier Aldo Moro. He wanted a dramatic pretext for a new crackdown on the Red Brigades and their supporters, the hit men said. Another theory involves an aerial assassination attempt on Muammar Gaddafi:


Major sources in the Italian media have alleged over the years that the aircraft was shot down during a dog fight involving Libyan, United States, French and Italian Air Force fighters in an assassination attempt by NATO members on an important Libyan politician, maybe even the leader Muammar al-Gaddafi, who was flying in the same airspace that evening. This version was supported in particular by investigative magistrate Rosario Priore in 1999. Judge Priore said in his concluding report that his investigation had been deliberately obstructed by the Italian military and members of the secret service, in compliance with NATO requests. In April 1993, the General Yuri Salimov, the Russian intelligence services, revealed that he had followed the events of Ustica through a Russian radar based in Libya, through the use satellite was able to monitor the southern Tyrrhenian Sea, "I saw that U.S. missile strike in error the DC-9"

A few years ago an Italian court, reasoning that since all the anti-aircraft missiles in Italy are under government control, and no other source for such a weapon has ever seriously been suggested, ordered the government to pay compensation to the victims' families.

As part of the government's struggle to put this incident behind them they have paid for the painstaking reconstruction of the plane from thousands of pieces found in the sea. The recreated plane has now been installed in the Museum for the Memory of Ustica in Bologna, along with other exhibits:


An Italian artist was commissioned to create the permanent display which, in addition to the wreckage, contains 81 mirrors which hide speakers that project whispered messages. There are also 81 hanging bulbs which constantly flicker on and off. A number of personal items were also collected from the crash site and have been put into black boxes which allow them to be in the museum without having the personal effects being gaped at.

So if you really want a close-up look at airplane wreckage, or just love murky conspiracies, this might be the place for you.
Posted by John at 1:43 PM