Violence in the European Chalcolthic 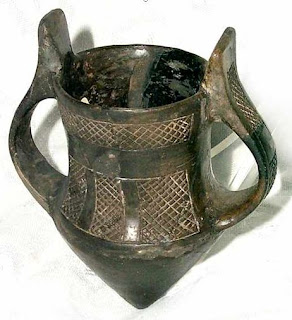 An old idea in European archaeology, especially associated with Marija Gimbutas (1921-1994), is that the continent was mostly peaceful in the mother-worshiping Neolithic era. Large-scale violence, in her view, emerged only in the Bronze Age, probably brought in by invaders who honored male sky gods.

There have always been lots of problems with this model, but now it is under attack from a new direction: evidence of large-scale violence in Europe as early as 4200 BC, well before the Bronze Age. During the "Copper Age" or Chalcolithic period, southeastern Europe saw the emergence of a fairly sophisticated culture, with large towns, long-distance trade, and a great variety of art. Excavations are ongoing at the largest site yet discovered from this period, Tell Yunatsite in Bulgaria. These excavations show that the town was surrounded by a massive wall as early as 4700 BC. The wall was built of pounded earth, 5 meters (16 feet) wide at the base, and preserved to a height of 2.8 meters (9 feet); the excavators guess it was originally about 5 meters tall. This town was destroyed with great violence around 4100 BC, probably by attack. Skeletons bearing signs of violence were found amidst evidence of burning. (This site also produced a skeleton from which a hand was amputated, probably intentionally, years before the person died.) 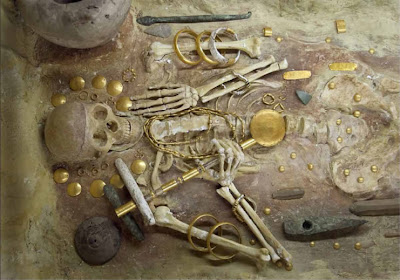 The "Old Europe" that Gimbutas thought was so peaceful may have been less violent than the late Bronze or Iron Ages, but it was no pacifist paradise.
Posted by John at 8:06 PM