In Egypt, Politics without a Constitution 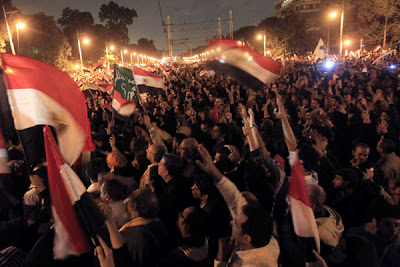 In Egypt, there is no constitution. A political struggle has now erupted there, which is interesting and important in its own right but also shows how politics works in such situations.

Right now, Egypt has no legislature. They have an elected President, Mohammed Morsi of the Muslim Brotherhood. And they have courts, but all the judges are leftovers from Mubarak's dictatorial regime. The courts have tried to limit Morsi's power in various ways and otherwise insert themselves in the political process, invoking various old laws and pieces of the now discarded constitution in ways that Morsi and his supporters have found maddening. Some American commentators have called the judges' approach "Calvinball," after the game from Calvin and Hobbes in which the rules change constantly according to the whims of the players. The judges would probably say in their defense that somebody has to make sure that this political neophyte and his religious fanatic friends don't totally screw up the country before a constitution can be put in place and tested.

Two weeks ago, Morsi issued in a decree in which he asserted that the judges would henceforth have no power over him. All of his future decrees would stand, whatever the judges said. In particular, he and his party would take complete charge of writing the new constitution and arranging the popular vote on its provisions.

The reaction to this decree was immediate and intense, both within Egypt and abroad. It seems to me that a strong case could be made for Morsi' action. Yes, it was dictatorial, but Egypt is in exactly the sort of situation for which the Romans created the office of dictator 2500 years ago: the normal political process has broken down, and the state faces a crisis in which decisions have to be made but nobody has the authority to make them. Morsi is the only person in Egypt who has won an election since the fall of the old regime, so why not him?

Yet this logic swayed hardly anyone. Denunciations flooded in from Egyptian commentators and foreign governments, and huge demonstrations erupted. At first the demonstrations were centered in Cairo and were led by the same people who led the demonstrations against Mubarak, that is, mainly young, secular urbanites. The Presidential elections had shown that these people were far from Egypt's majority, since their candidate ran third behind both Morsi and a man representing the old regime. So at first Morsi tried to ignore the protests and soldier on, and his own followers organized counter protests. But the protests against his decree swelled and swelled, and they massed outside the Presidential Palace in a way that threatened Morsi with a choice between letting them sweep him out of the Palace or call on his enemies in the army to shoot the protesters, pretty much destroying his claim to represent a new kind of politics in Egypt. Opposition to the decree was heard from other parts of the Egyptian political spectrum, including supporters of the old regime and even some Islamists. The protests spread to other cities and even some towns.

Yesterday Morsi threw in the towel and cancelled his decree. Without a constitution, without votes, the people of Egypt had made it plain that they would not stand for the President's assertion of power. The conflict will continue, though, because Morsi still insists that the draft constitution written by his party will be put to a popular vote in just a week. The opposition thinks this is a mad rush designed to sneak through a document favoring the Islamists, and they want the vote delayed so the provisions can be debated. Stay tuned.

Why the strong reaction to Morsi's decree? Because of our reverence for the law. In almost all human societies, we rely on publicly known rules to guide our everyday conduct, and one of our most common words for a terrible situation or evil person is "lawless." We expect law to limit arbitrary power and protect us from violent usurpation. Societies with very weak governments, such as those of the early Middle Ages, sometimes develop an exaggerated reverence for the law, as if the constant repetition of principles had some magic power to restrain the wicked. And perhaps, sometimes, it did; even very thuggish rulers like to think that they are acting within their rights.

In our modern age of strong governments, we especially fear a leader who has put himself above the law. Most dictators therefore make a point of following the law themselves, at least most of the time. I am not sure that this makes much difference, in the end; certainly Stalin and Hitler were able to make their legal systems carry out whatever crimes and persecutions they wanted. Yet we still have this respect for law, and still expect to limit arbitrary power. When Morsi declared that no laws would apply to him, he seemed to put himself against the whole apparatus of law, order, procedure, rules, and so on that is one of the foundations of civilization, to declare that his own whims would take precedence over the codified experience of centuries. As he has learned, this was a terrible mistake.
Posted by John at 8:20 AM

this illustrates one of the 'failed states index' categories: legitimacy of the state. there are more (like the rise of factionalized elites), all of which mark egypt as yet another mideast mess.

is it the history of colonialism that seems to mark so many countries for failure?