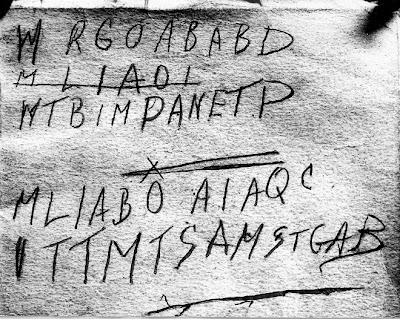 Here's another puzzle to think about during your free time over the holidays:


What makes a cipher inherently more interesting is when it's found in the pocket of a dead man. On Dec. 1, 1948, the body of a well-dressed but unidentified person – popularly known as the Somerton Man – was found near a beach in Adelaide, Australia, with no discernible signs of trauma. It's unknown how he died to this day, and he was in excellent physical shape. (He was possibly killed by an undetectable poison.) His clothes had no tags. For all practical purposes, he did not exist. This led to speculation that the Somerton Man may have been mentally disturbed and committed suicide, or even a Soviet spy who was discovered and assassinated.

Now it gets even weirder. Within a smaller pocket – a fob pocket inside one of the man's larger pants pockets – was a scrap of torn paper with the words "Taman Shud," meaning "ended" in Persian. The scrap was later traced to a copy of The Rubaiyat of Omar Khayyam, itself discovered in the back seat of an unlocked car on the presumed night of the murder, near a location where the dead man is believed to have visited before his death. In the back of the book were five lines of coded letters, written in pencil. Even worse, "[it's] a short cipher, so statistical analysis doesn't reveal very much," explains Knight. "You would hope that the cipher could be connected with text in The Rubaiyat book."

From a good feature at Wired on seven famous unbroken codes.
Posted by John at 12:34 PM

The first line MRGOABABD could be TAMAMSHUD in reverse O_O