The Sad Decline of the American Working Man 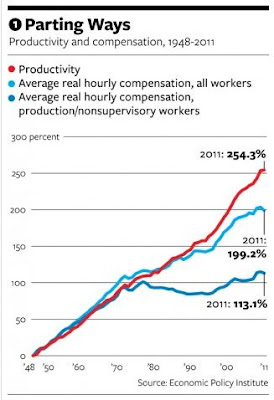 Jonathan Rauch has a powerful essay at the National Journal about the decline of the American worker, especially the male kind. He has lots of statistics and graphs on the dismal economics of all this. He starts from the chart above, which shows that although average productivity has continued to rise, the wages of lower level employees have gone nowhere since 1975. The share of corporate income being paid out in wages has also declined, to its lowest level ever. The fate of workers has been disconnected from the overall performance of the economy -- even when GDP is booming, workers don't see the benefit. Since 1969, GDP per person has doubled in America, but the average wage has been effectively unchanged.

The problem is especially bad for workers who have never been to college. One of the reasons these changes have hit men harder than women is that women have responded by getting more education. Men have not; the percentage of men getting bachelor's degrees has not gone up in decades. 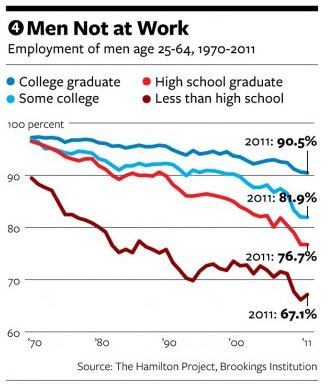 Instead, many men have dropped out of the workforce altogether. In 2011, among men of prime working age, 1 in 4 with a high school diploma but no college were not working, and 1 in 3 high school dropouts. Which makes the situation of the average American man worse than you usually hear:


Most measures of earnings look only at the incomes of men who work; their earnings have gone nowhere for the past 40 years. That measure, however, overlooks the large and growing population of men who don’t work. If you add them to the mix and thereby look at the earnings of all American men, including nonworkers with zero income, [you find] that the median man in America, by this measure, is almost 20 percent worse off than he was four decades ago.

Obviously there is a lot of argument about why this is so, and some conservatives blame moral decline and government handouts. But Rauch works at the Brookings Institution, and he is one of many centrists focused mainly on the economic side. After all, it's straight Econ 101 that if the rewards of work fall, people will work less. It seems obvious to me that an increasingly unfair economy will drive more and more people to drop out altogether, rather than slave at miserable wages for executives who make hundreds of millions.

And yet that can't be the whole story. There are companies in America that offer top pay for workers who have never been to college but can't hire enough people; long haul truckers are first among them, but there are others. I have friends in blue collar trades who can't keep employees.

Stagnating wages are one part of an ongoing decoupling of work and male life. Once our jobs supplied our very names, but now work seems to be more and more an aside to life, something we do because we have to and would sooner do without.

I find that one of the defining features of our age is a lack of pleasure in work for many, many people. The sort of working man's solidarity that fed into and drew strength from the union movement seems to be disappearing. Is there anybody left who thinks it is more noble to make things in a factory than to wear a suit to an office? Office life for many professions is being choked by bureaucracy, as people who are, say, archaeologists have to spend more and more of their time jumping through corporate and regulatory hoops. Work is increasingly about money, plain and simple, and therefore working 40 hours a week for a wage that still leaves you poor seems less and less appealing.

I think the decline of patriarchy is another part of this. Married working men used to have wives who cooked their meals and cleaned their houses; by virtue of being "heads of household" they acquired a status that meant something. In the two-career economy, a working husband no longer gets that status boost, and finds that he has more chores to do than he did when he was single.

Obviously it is easy to exaggerate this "crisis." After all, most men do work. But I have a strong sense that the millions dropping off the bottom of the ladder is a sign of something profoundly wrong with our whole socio-economic system. We more and more do meaningless work in alienated workplaces for corporations set up as pyramid schemes, dreaming of windfalls and early retirement. That, to me, is the real crisis, and I have no idea what to do about it.
Posted by John at 6:51 PM